EUCOM creates forum to improve the Joint Force through ERIC 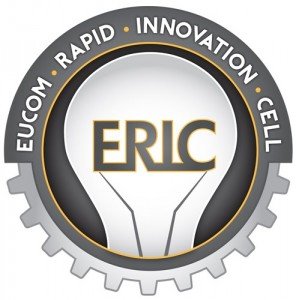 The first “Call of Innovation,” requested on Dec. 18, received 15 submissions, three of which were selected for rapid implementation.

The ERIC team held its first ever innovation forum at EUCOM Headquarters February 2. Three innovations were chosen out of a pool of 15 submissions to “pitch” their solutions to Lieutenant General Garrett and the ERIC team (consisting of eight Officers and Enlisted personnel assigned to EUCOM). All three innovations received the panels stamp of approval and will now begin testing, evaluation, and implementation.

ERIC’s FY16 2nd Quarter submission message will be released shortly, setting the stage for expanding the program to the entire EUCOM Area of Operations. LCDR Chris Casne is a Naval Officer within the Navy’s Civil Engineer Corps.Chris is a founding member of the ERIC and currently works as the Chief of NATO Programs for EUCOM’s Logistics Directorate (EJC4).  During his 13 year Naval Career he has served with multiple Naval Mobile Construction Battalions (NMCB) and Naval Facility Engineer Commands (NAVFAC) and has been assigned to EUCOM since June 2015.

Innovative idea: To increasing perimeter security, and enhance quick reaction force response, recommend the use of commercially available unmanned vehicles to conduct security patrols inside base perimeters. As a cooperative venture, the vehicles would be handled jointly between on-base Military Police and host nation security liaisons.  After an initial testing period, the system could be employed across multiple EUCOM facilities. Mr. Christopher MacPherson has been assigned to EUCOM ECJ5/8 for the last two and a half years.  Prior to his assignment at EUCOM, Mr. MacPherson spent more than four years working for the Chief of Naval Operations in DC. While day-to-day he works various posture related issues for the command, he has always been interested in the emergency services after spending more than a decade as both an EMT and firefighter.  This interest in emergency response drew his attention to the need for a quick response team to aid in medical emergencies at Patch Barracks.

Mr. John Fay is a DOD civilian serving as chief of EUCOM’s Information Superiority and Knowledge Management Division.  Twelve years ago, Mr. Fay joined the EUCOM team as a contractor and cofounded the Knowledge Management team.  Since then, he’s delivered leadership and innovative solutions to the headquarters and theater.  Mr. Fay’s prior service includes contract work to all services and active duty Naval service.

Innovative idea: Thousands of man-hours are expended annually on creating and maintaining the MUB.  A significant reduction in man-hours spent can be achieved by using the existing knowledge management team to focus and refine the MUB content as well as the delivery method. The capability exists to automate or pull live feed information into pre-existing slides which would reduce the amount of hands-on time required to produce the MUB .