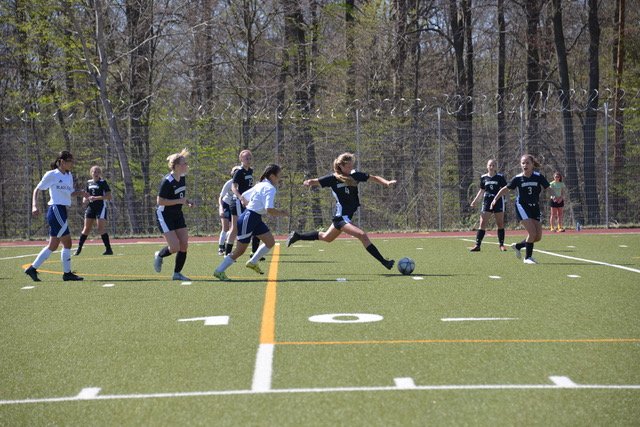 The Stuttgart High School girls soccer team picked up where they left off last season when they brought home top honors, winning their first four games of this season in resounding fashion.

The latest goalie picked apart by the Panther scorers belonged to the Black Forest Academy Falcons, which traveled to Stuttgart only to be beat 7-2 by the Panther feet, April 20. Although the score seems a bit lopsided, the Panther coach praised the BFA players for the challenge they brought to the match. 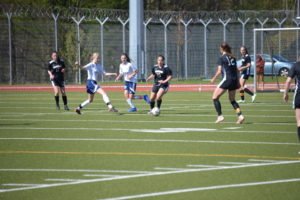 The Panthers converge on the ball during their match against Black Forest Falcons, ultimately prevailing.

“They have some pretty talented players on their squad who challenged us early in the game,” said Bill Ratcliff, head coach for the girls’ soccer team. “We have a lot of depth and talent on this team that other teams do not, and it’s just a matter of time when those factors take over for us.”

Stating the team has talent is an understatement, as Ratcliff has a number of high quality players he can field, such as Ragan Treichel, renowned sweeper; Liv Sullens, a threat from outside; Victory Antoine, team’s top scorer; and Lily Lakich, considered the best player in Europe. These are just a few of the talented members on this defending championship team.

If last year’s squad was considered the dream team, this year’s team may be labelled the super dream team as Ratcliff believes it is even more talented.

“It’s all about the team chemistry and it’s considerably stronger this year,’ stated Ratcliff.  “The skill level we have at every position is higher than last year.”

As the team prepares for its next game at Kaiserslautern on May 4, the path to bringing home the 2019 championship trophy seems well in hand. However, Ratcliff is taking nothing for granted.

“Nothing is guaranteed. As long as the team chemistry stays strong, we can avoid injuries and everyone keeps their academics where they need to be; well, you just never know,” Ratcliff said.

The SHS boys’ soccer team lost their close game to the visiting Black Forest Academy Falcons 2-0, April 20. The Falcon’s stingy defense thwarted all the scoring opportunities the Panthers were able to create. Although the Panthers’ defense played well, the Falcons were able to net a couple of goals to take the game.