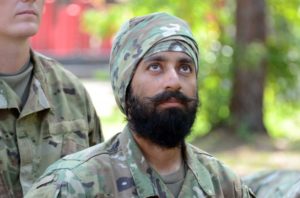 Army directive 2017-03, signed earlier this month, spells out changes to Army Regulation 670-1, the uniform policy, for the turban, worn by male Soldiers, the under-turban; male hair worn under a turban; the hijab, which is a head scarf worn by females; and beards worn by male members.

Sgt. Maj. Anthony J. Moore, the uniform policy branch sergeant major inside the Army’s G-1, said the policy change was made largely as a way to increase diversity inside the service and provide more opportunities for Americans to serve in uniform.

“This is so we can expand the pool of people eligible to join the Army,” Moore said. “There was a section of the population who previously were unable to enlist in the Army. This makes the Army better because you’re opening the doors for more talent. You’re allowing people to come in who have skills the Army can use.” 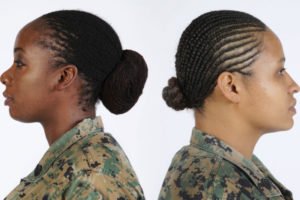 Corps Commandant Gen. Robert B. Neller approved lock and twist hairstyles in uniform, Dec. 14, 2015. The results of Uniform Board 214 and 215 were released as part of Marine Administrative Message 622/15. Marine Corps photo.

Female Soldiers have been asking for a while for permission to wear “locks,” or dreadlocks, Moore said.

“We understood there was no need to differentiate between locks, cornrows, or twists, as long as they all met the same dimension,” Moore said. “It’s one more option for female hairstyles. Females have been asking for a while, especially females of African-American decent, to be able to wear dreadlocks, and locks, because it’s easier to maintain that hairstyle.”

The Army directive says that each lock, or dreadlock, “will be of uniform dimension; have a diameter no greater than 1/2 inch; and present a neat, professional, and well-groomed appearance.”

All female Soldiers can opt to wear dreadlocks, Moore said.

The Army has granted waivers to Sikh Soldiers since 2009 to wear a turban in lieu of issued Army headgear and allowed those same Soldiers to wear the turban indoors when Army headgear would normally be removed. Moore said for those Soldiers, the waivers were permanent, but that it was unclear whether this was the case Army-wide. That is no longer true, he said.

The new policy is that a Soldier seeking religious accommodation to wear a turban must make the request only once, and the accommodation will apply to the Soldier for the Soldier’s entire Army career.

In an Army directive dated Jan. 3, then Secretary of the Army Eric K. Fanning made official the policy regarding the wear of turbans, beards, hijabs, and under-turbans.

“Based on the successful examples of Soldiers currently serving with these accommodations, I have determined that brigade-level commanders may approve requests for these accommodations, and I direct that the wear and appearance standards established in … this directive be incorporated into AR 670-1,” Fanning wrote in the directive.

“With the new directive, which will be incorporated into the Army regulation, religious accommodations are officially permanent for Soldiers,” Moore said.

The level at which requests for such accommodation can be approved has also changed. Whereas requests in the past rose to the Pentagon before they could be approved, permission can now be granted by brigade-level commanders. Bringing approval down to that level, Moore said, speeds up the approval process dramatically.

That was the intent, Moore said. “They are trying to speed up the process for the Army and for the Soldier.”

Moore said the same religious accommodation rules apply for Soldiers seeking to wear a beard for religious reasons as well as female Soldiers who want to wear a hijab.

If brigade-level commanders feel it inappropriate to approve the accommodation for some reason, he said, then they can recommend disapproval, but the recommendation must be channeled to the GCMCA for decision. Under the new policy, requests for religious accommodations that are not approved at the GCMCA-level will come to the secretary of the Army or designee for a final decision.

Still at issue for Soldiers is wear of a beard in conjunction with a gas mask. In the Army directive, Fanning wrote that study results have shown that beard growth can degrade “the protection factor provided by the protective masks … to an unacceptable degree.”

“Although the addition of a powered air-purifying respirator and/or a protective mask with a loose-fitting facepiece has demonstrated potential to provide adequate protection for bearded individuals operating in hazardous environments,” Fanning wrote, “further research, development, testing, and evaluation are necessary to identify masks that are capable of operational use and can be adequately maintained in field conditions.”

Moore said that until further testing is completed and alternatives are found to protect bearded Soldiers in environments affected by chemical weapons, Soldiers with beards may be told to shave them in advance when there is specific and concrete evidence of an expected chemical attack.

If a chemical warfare threat is immediate, Moore said, instructions to Soldiers to shave their beards would come from higher up, at the General Court-Martial Convening Authority-level — typically a division-level commander.

Likewise, Soldiers who seek religious accommodation to wear a beard will not be allowed to attend the Army schools required for entry into chemical warfare-related career fields, Moore said.

For wear of the beard, Moore said, the new directive allows for beards to be as long as the Soldier wants, so long as the beard can be rolled up and compressed to less than two inches from the bottom of the chin. Additionally, for those Soldiers wearing a beard under a religious accommodation, the rules for wearing a mustache are also new. Mustaches may extend past the corners of the mouth but must be trimmed or groomed to not cover the upper lip.

Maj. Kamaljeet Kalsi, a civil affairs officer in the Army Reserve’s 404th Civil Affairs Battalion at Fort Dix, New Jersey, is a Sikh Soldier who wears both a turban and a beard. He said he welcomes the new policy change as an indication that the Army is now looking to accommodate his faith and open its doors to talent in the United States that might have been previously untapped.

“To me, it says the nation is moving in a direction that the founders intended, a pluralistic democracy that represents all,” Kalsi said. “I think we’re a stronger nation when we can draw from the broadest amount of talent, the broadest talent pool. And it makes us a stronger military when the military looks like the people it serves.”

Capt. Simratpal Singh, with the 249th Engineer Battalion prime power section, said for him the policy is about acceptance.

“On a personal level, it means that I can serve freely and without having to worry about any stipulations or constraint,” he said. “That’s all I want is to serve in the U.S. Army just like any of my peers.”

Because the next edition of AR 670-1 is expected to be published next month, the Army will not be able to include the new rules. But Moore said Soldiers can expect to see these most recent changes in the AR 670-1 that comes out at this time next year.