Witches of Fasnet the night before fasting 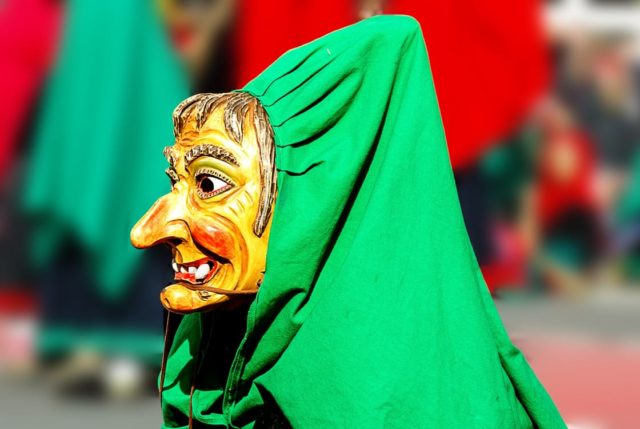 Fasching, Fastnacht, Fasnet or Karneval all refer to “the last of the great parties” before the long dry spell, 40 days of Lent.  In Germany the terms vary regionally, but the words are NOT interchangeable as each is derived from a different source.

Fasching dates back to the 1200s and is derived from the Germanic word vaschanc or vaschang = Fastenschank in modern German:  that is, the last serving of alcoholic beverages before Lent.

Fasnet is the Swabian word based on the old German word fasen – “to be foolish, silly, wild.”

Baden-Wuerttemberg’s Fasnet, the truly different than other pre-Lenten activities of mad and merry festivities which continue until midnight before Ash Wednesday.

Fasnet, the night before fasting, is symbolically “carried to the grave” just before Ash Wednesday. Hundreds of figures clad in white sheets and black top hats form a funeral procession.  A straw effigy of Fasnet is tossed into a stream, and at the stroke of midnight, Hexen (witches) dance around a blazing fire and throw their brooms into it.  When all the brooms have been burned and turned to ashes, winter is said to have been “swept away” for another year.

During these riotous days, there is enough drinking, partying, carousing and whooping it up to last even the most dedicated Fasnet rascal.  And that’s the point, after all, before repentance and remorse supposedly set in right after midnight of Fasnet Tuesday. Because on Ash Wednesday, all the tired masqueraders, the grease-painted heroes and clowns and  inebriated stumblers have to face the sweeping up, for inevitably, Lent will have arrived, and Fasnet is over, for another year.

Tip: Should you happen to miss the Swabian Fasnet fun in this area, or if you enjoyed it so much that you want more, you might head south to Basel in Switzerland and have another chance at revelry a week later, Swiss-style.  The Basel version picks up where the Rottweil and  Swabian Fasnet left off.  Read more about it here.