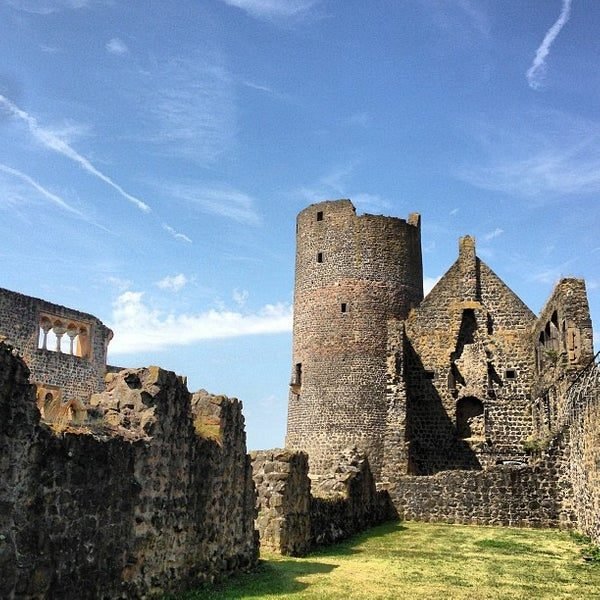 Burg Guttenberg is one of the oldest and most beautiful castles in Germany, featuring perfectly preserved medieval architecture dating back to the 12th century.

After meeting with Dietrich Beatsch, the former resident of Kurmaerker Kaserne (known today as Patch Barracks–see the July 2019 edition of the Stuttgart Citizen) the 80-year old German gentleman now returned the favor and invited us to come to his hometown to visit  Guttenberg Castle–the castle of eagles.

Guttenberg Castle is located in Hassmersheim towards Mosbach/Bad Rappenau (Heilbronn area), approximately an hour and a half drive from Böblingen. It is one of the oldest and most beautiful castles in Germany. Here you can admire the perfectly preserved medieval architecture and the scenic surrounding of the Neckar Valley dating back to the 12th century. As visitors pass the outer courtyard and enter the castle, they’re taken back in time to the Medieval Age at the on-site museum. There, you’ll learn about the history of knighthood and have a seat in the medieval tavern.

One of the castle’s main attractions is the German Raptor Center, with 80 large birds of prey and two shows per day at 11 a.m. and 3 p.m. The center is famous for its spectacular flying displays with its eagles and vultures. 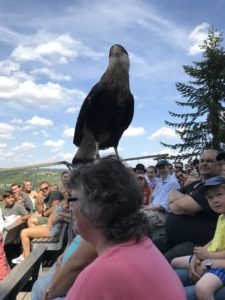 After soaring overhead, sometimes the birds of prey land on the heads of audience members.

“I truly enjoyed the eagles and the owls,” said Stuttgart military community member Beverly A. Sowell.  “What I liked most about the bird flight show is how they reacted to the commands of the trainers. The birds had a calming spirit about them.”

The great number of large, free-flying birds of prey performing in the flight shows is unique in Germany. Huge birds with a wingspan of more than two meters, such as griffon vultures, bearded vultures, and various sea eagle species, golden eagles and imperial eagles take flight at the same show. They circle over the Neckar river or high above the battlements of Guttenberg Castle and fly directly over the heads of the visitors, and sometimes may even land on their heads or next to their seats.

“It was exciting to see the smaller birds interact with the crowd, sitting on their heads and being playful,” Sowell said.

During the flying display, the human staff provides entertaining knowledge for young and old (in German with translations in English at points, especially the warnings in the beginning when the audience is told not to stand up, not to eat anything during the show and not to touch the birds). Overall, it’s a unique and amazing experience.

After the show, guests may see all of the birds on display before ended the day at a nearby gasthaus to enjoy a great dinner.

Burg Guttenberg is located at Burgstraße 1, 74855 Haßmersheim. Entrance fee to the hourlong flight show is 11 Euros per adult.

(Editor’s note: The author is invited to return to Hassmersheim in autumn to visit another castle–the home of the Baron of Münchhausen, who was also known as the “Baron of Lies.”)