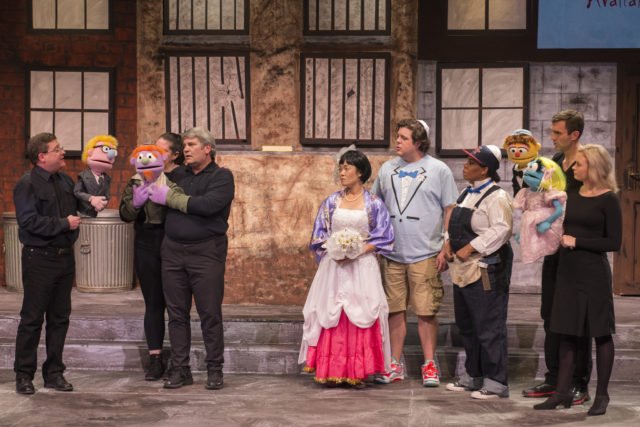 The crew at Stuttgart Theatre Center kicked off its 2018/19 season on Oct. 19 with the performance of “Avenue Q”, a three-time Tony Award winning musical.

Avenue Q is a unique play that addresses issues and concerns people experience as they enter adulthood and are forced to accept the fact the teachings they learned from children’s television shows about being special or that they could do anything they wanted were a little misleading.

The musical is notable for the use of puppets, animated by unconcealed puppeteers, to address adult topics such as racism, sexuality and pornography to name a few.

Saying that the show is filled with adult material and not suitable for the little monsters, which is the warning on the program, is an understatement as a slew of sexual innuendoes and naughty four letter words bombard the audience’s senses throughout the performance.

That said, once theatergoers adjust to the fact the play actually centers on the puppets and not the humans who tote the little guys and gals around the stage, the 20 varying adult topic skits brought on much laughter from the audience. 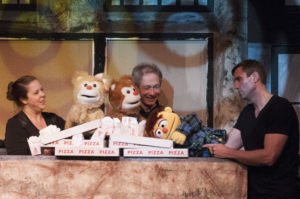 A dejected Princeton (right) collapses into a pile of pizza and takeout boxes as the Bad Idea Bears arrive to lead him further astray. Photo by Kevin Abel, USAG Stuttgart Public Affairs.

The challenge for the cast is to learn the lines, recite them flawlessly and do so while trying to convince the audience that the puppets are doing the talking instead of the humans.

As Avenue Q is a musical and not a puppet show, the cast’s rendition of the numerous songs sung throughout the two-hour performance were right on key, and often sung with great emotion via the mouths of puppets.

The cast includes some of the core STC actors such as Nathan Dehnke, who hasn’t found a role he couldn’t perform well, and as the puppeteer of Princeton, a naïve young man who is just searching for his purpose, Nathan shines in the role even if it is second fiddle to a puppet.

Another cast member who graced the STC stage a couple of times during the last year’s performances is Sarah Watson, whose talents as an actress and singer are highlighted in her puppeteer role as Kate Monster, a young lass looking for that elusive guy.

Other favorites of the STC stage include: Kira Dominique Lenz, who puppeteers Lucy, the lady of the night and any other time of the day; Axel Schwaigert, who puppeteers Trekkie Monster, who makes known the true value of the internet; Jovoné Lewis, who plays the role of Gary Coleman, yes that Gary Coleman; Dennis Austin, who puppeteers Rod, who reveals he is a gay puppet. 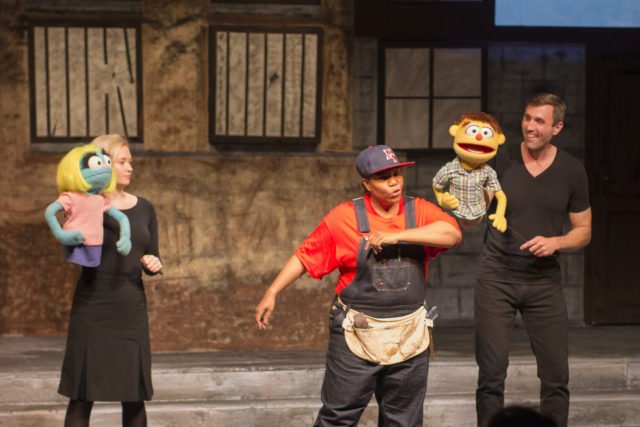 A couple of newcomers to the stage include, Major Manley, who puppeteers Nicky, Rod’s roommate; Danny Kelleher, who plays one of the three human roles and shows his talents as an actor with a sense of humor; Christina Crowder, who literally lends a hand to Nicky and lends her voice to teacher Mrs. T.; Joan Luu, who plays another of the three human roles as Christmas Eve, a feisty Japanese immigrant trying to find work as a therapist; with “him” (her husband), and Autumn Mann, who puppeteers Ricky, one of the bad idea bears.

Avenue Q may not be right for the faint of heart or for the young in age, but the talents the cast displays in this performance proves once again why the Stuttgart Theater Center is the best in the land.

The show is intended for mature audiences only (18+) due to strong language and adult situations. It is not for children.

See all photos from the show on the USAG Stuttgart Flickr page.