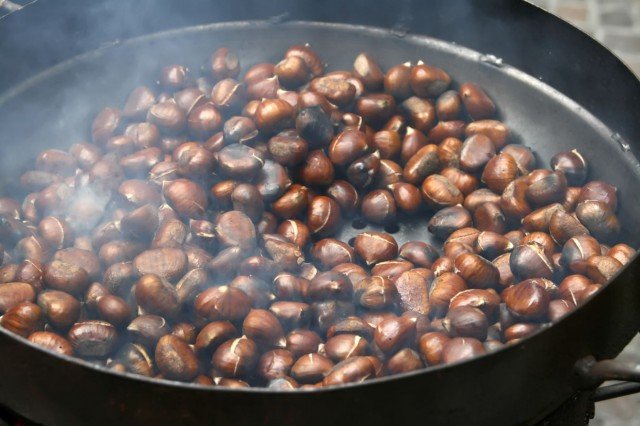 Roasted chestnuts, whether over an open fire, or an iron stove, are as much a part of the German Christmas tradition as they are a part of the American holidays. Much like the traditional New York sidewalk Christmas scene, the aroma of roasting chestnuts wafts through the air at Christmas Markets throughout Germany.

Called kastanien, maronen or maroni, chestnuts are available at stands in most German Christmas markets. For those who have never tried them, their warm sweet flavor can definitely be a treat on cold winter nights.

The chestnut has long been a staple food in Europe, especially in winter months, as it is harvested in September and October through much of Europe. Rich in minerals and vitamins, high in fiber, and low in fat, they are a very good source of nutrition.

Many historians claim that the tradition of roasting chestnuts around the holidays began in the 16th century Rome when vendors began selling them on street corners during the holiday season.

Enjoying them at the Christmas market

Look for stands with signs that say Heisse Maronen or Maroni. The distinctive roasted nut smell can also be a dead give-away.

Chestnuts are usually sold in 100 gram increments. 100 grams is just enough to get a taste of them, and 300-500 grams is a small snack for two to share.

They are typically served in brown paper bags or a brown paper cone. The outside hard shell, and sometimes an inner skin is peeled away to get to the sweet nut inside.

Be careful when handling them as often they are served fresh from a 425-degree Fahrenheit oven.

About Chestnuts in Germany

Chestnuts can be collected throughout Germany beginning in the fall. The chestnut grows in a spiny green pod which usually contains two or three chestnuts (most often, two larger ones and one very small one). The pods burst open when ripe, and fall to the ground.

It’s useful to have thick leather gloves to separate the chestnuts from their pods, though not entirely necessary. Collecting chestnuts from public parks and forests is permitted, but be sure not to collect them from private property.

Once collected, the nuts can be kept for a few months by storing them in a cool dry place.

Making them at home

To roast the chestnuts:

Check them regularly to make sure they are not burnt. A slight blackening of some parts of the shell is normal, but large blackened areas means the chestnuts are burning. Properly roasted chestnuts should be firm to the touch, and should peel easily. Chestnuts that are difficult to peel, or have a bitter taste, have been under-cooked. Hard, dried-out nuts are a sign of over-cooking.