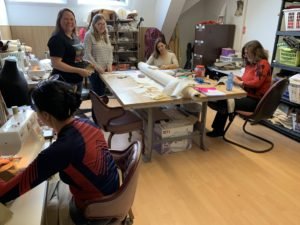 Three years ago, Kyla Sikorski began volunteering with the Stuttgart Theatre Center when her oldest daughter, Luella, was cast in “Seussical the Musical.”

“They needed parents to be present because some background checks were not completed,” Sikorski said. “I actually started making costumes because I got bored sitting there.”

That initial boredom turned into a drive that led to Sikorski logging 871 volunteer hours in 2019, and winning “Best Costume Design for Musical” at the IMCOM-E Tournament of Plays Competition.

“They put on their costumes on opening day, and they feel good and look great. It’s magic.”

Her knack for sewing began at age 8. She learned from her mother to make clothes. “I wanted to design what I wanted to put on my body,” Sikorski said, adding how she created her own prom dress from wool, a major accomplishment.

However, what attracts her to the theater is when her costumes are on actors, on stage. “They put on their costumes on opening day, and they feel good and look great,” Sikorski said. “It’s magic.” 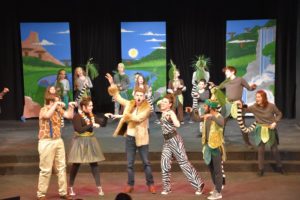 Sikorski is most proud of the costumes she made for Madagascar Jr., for which she won an award, and for those she created for The Hello Girls, which has yet to premiere due to COVID-19 complications.

“The costumes for Hello Girls are probably the ones which took the most work because they were set in WWI,” Sikorski said. “We made every costume from scratch.”

Alan Buxkemper, USAG Stuttgart Entertainment Branch Chief, is impressed by Sikorski’s efforts. “It simply amazes us that a person with a family, job, and all the other factors of day-to-day life takes the time to volunteer,” Buxkemper said. “This sort of dedication is rarely found in today’s world.”