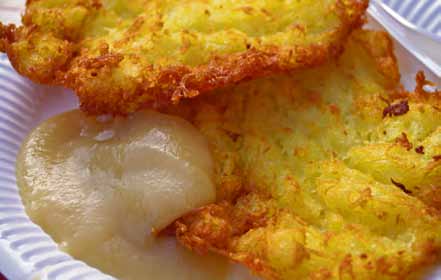 Walking through just about any Christmas market in Germany, the aromas of the wide variety of enticing food offerings can be dizzying. The aromas of roasted chestnuts, fresh baked bread, and the distinctive cinnamon-and-red-wine bouquet of Gluhwein combine to create an olfactory memory that spells Christmas time for seasoned Christmas market goers.

If you happen to notice an enticing deep-fried potato smell pushing through all of that you may be nearing a Reibekuchen or Kartoffelpuffer mit Apfelmus stand.

The Reibekuchen is a sort of potato and flour pancake that is deep fried in oil and served fresh, and very hot, with a few different sauces. While the term pancake is used to describe Reibekuchen, don’t think Sunday mornings with maple syrup. These are not your auntie’s basic pancakes. In fact they are very similar to fried hash brown patties.

Reibekuchen are also known as Kartoffelpuffer in some areas, and was probably popularized during the Potato Decree of 1756, when King of Prussia, Friedrich the Great ordered the Prussian bureaucracy into a potato information campaign to fight spreading fear of famine. This event popularized the potato in Germany and elsewhere in Europe, and most likely the Reibekuchen’s wide spread popularity is simply a part of the love of potatoes that was developed by this effective information campaign.

Reibekuchen are most often served in threes on small paper plates with the sauce of your choice, or no sauce at all. One glance at them, and how they are prepared (deep fried on a pool of oil) will make it clear that they’re not in the low fat category of Christmas snack. IF your diet will allow it however, they can be a tasty way to stave off hunger and cold at the Christmas market.

Making it at home

Recipes for Reibekuchen vary but most start with something along these lines:

Mix grated potatoes, chopped onion, eggs and flour into a dough. Ladle dough into pancakes on a pool of cooking oil on medium to high heat.

Serve with applesauce or German Apfelmuss.

As an easier alternative, Reibekuchen are also available in the frozen food sections of most German grocery stores (usually near the frozen French fries). They are ready made and just need to be fried or heated according to the directions on the package.