History: The origin of Christmas markets 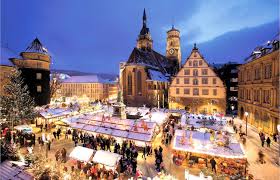 They are called “Weihnachtsmarkt” or “Christkindlmarkt,” originally depending on whether the region is Protestant or Catholic. Whatever the name, however, they are great opportunities to get into the spirit of the season. Get ready for Christmas markets of all kinds — from festive to freaky, from traditional to trendy.

The idea that the “Christkind” (Christ child) brings Christmas gifts dates back to the Protestant reformer Martin Luther (1483 to 1546). In his time, it was traditional to give children presents on Dec. 6, St. Nikolaus Day.

To turn away from the Catholic veneration of saints and saint’s days, Luther laid gift-giving in his household on Christmas Eve. He told his children that “Holy Christ” had brought their presents. This tradition quickly took hold in Lutheran families. Through the years, this fictional gift-giver took form. It was most likely the medieval German tradition of Christmas plays, with an angel of the Annunciation as the main character, which gave the Christmas angel its earthly appearance. As angels of all sorts began to be depicted as female, and not only male, the Christkind also took on a feminine appearance. That is why today a young woman is chosen usually to play the part of the Christkind.

Nevertheless, whatever the name, from crib figurines to wood carvings, it can all be found at a Christmas market. Depending on the size of the event, some markets last from the end of November to Christmas Eve, whereas others might just take place on one single weekend. Note that Sunday will be a remembrance day on which all shops in Catholic regions will be closed. Deciding which market to visit can be difficult, since there are so many.