HomeCulture & LeisureApril in Germany from Fools’ Day to Walpurgis Night

April in Germany from Fools’ Day to Walpurgis Night

April, the fourth month in our Gregorian calendar, is one of four months  in the year with 30 days. The flowers for April are the daisy and the fragrant sweet pea.  With regard to the weather, old German peasants’ almanacs proclaim, April, April, macht was er will (April does just what it likes). The ancient Romans named this month April from the verb aprire meaning to open, since it is the season when trees and flowers begin to open. Also, April was sacred to the Roman goddess Venus. The name April is comes from  Venus’  Greek equivalent goddess, Aphrodite.

April Fools’ Day
Narrentag, April 1, is the 92nd calendar day, with 274 days remain until year’s ends. This day has long been popular for silly pranks and practical jokes such as sending people on fool’s errands.

Several ancient cultures observed such days of foolishness in spring. The Romans had a festival named Hilaria (as in hilarious) rejoicing in the resurrection of Attis, god of vegetation. Eventually, trick practices spread throughout Europe. The passing of winter to spring seems to lend itself to lighthearted celebrations. Some call it spring fever. 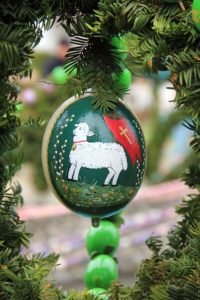 Passover
The Jewish festival  celebrates the Israelites’ liberation from bondage and their freedom as a nation under the leadership of Moses. Passover commemorates the story of the Exodus, which freed the Jews from slavery in Egypt as described in the Tenakh. Families joyously celebrate the Passover at home with a feast called the Seder, which includes the traditional reading of the Passover story. Unleavened bread called matzo is eaten to symbolize the Jewish exiles’ travails and survival on their long journey through the deserts to the Promised Land.

Easter
Also called Resurrection Sunday, Easter is a festival celebrating the resurrection of Christ from the dead, described in the New Testament as having occurred three days after his crucifixion, circa 30 A.D. It is the most important holiday in the Christian religion and calls for singing and rejoicing, church bells ringing, and flowers adorning the many traditional religious and secular festivities.

April 1 is a prominent birthday. On April 1, 1815,  Otto von Bismarck was born in Schönhausen (Elbe).  Prussian statesman and “Iron Chancellor” of Imperial Germany from 1871 to 1890, he is credited with the creation of a unified German state. Historical hero or nemesis, it was Bismarck whose policies of  “Iron and Blood” and “Realpolitik” (realistic politics) decisively formed and molded Germany and Europe in the late 19th century, paving the way for the rivalries and wars of the 20th century.

April 22 Earth Day is an annual worldwide event to show support for environmental protection. First held in 1970, it is now coordinated globally by the Earth Day Network and celebrated in more than 192 countries each year

Arbor Day (from the Latin arbor, meaning tree) is recognized on the last Friday in April as an unofficial  holiday in many countries around the world encouraging people to plant and care for trees.  The first American Arbor Day originated in Nebraska City, invented by J. S. Morton.  On that April day in 1872, an estimated one million trees were planted in Nebraska.

The month of April ends April 30 with Walpurgisnacht (Walpurgis Night), the last night of the month, linked with age-old superstitions and customs. It is the eve of the feast day of an 8th-century abbes, St. Walpurga. Having no connection with the saintly nun’s canonization except for the date, German folklore relates instead the gory tale of Walpurgisnacht as the night of witches’ gatherings on the Brocken, the highest peak in the Harz Mountains of central Germany. To this day, in hilly and mountainous regions of southwest Germany, Austria and Switzerland, tradition calls for huge bonfires to welcome the month of May. Celebrants dress in costumes, play pranks, and make loud noises intended to keep danger (and witches) at bay.

In some areas of southwest Germany, people hang blessed sprigs of greenery from their houses and barns to ward off evil spirits and to invite balmy spring breezes to enter.  The month of May is mere hours away.