National Brain Injury Awareness Month in March is intended to remind us of the serious impact of traumatic brain injuries, or TBI, throughout our population.

The numbers are telling.

The Centers for Disease Control and Prevention reports that approximately 2.5 million emergency room visits, hospitalizations, or deaths were associated with a singular TBI or a combination of a TBI and additional sources of injury and that annually, traumatic brain injuries are responsible for an estimated 50,000 deaths.

TBI-associated costs within the United States are estimated at a staggering $56 billion annually. The DOD spends an estimated $1.1 billion each year on TBI education and treatment.

There are more than five million Americans living with a TBI that has resulted in a permanent need for assistance in daily functioning. These TBI survivors are left with severe behavioral, cognitive, and communicative impairments.

TBIs pose a significant public health problem, especially for children aged 5 years and younger, male adolescents and young adults ages 15 through 24, and the elderly who are 75 years or older. In fact, this form of injury is the most common cause of death and acquired disability among children and adolescents in the U.S. 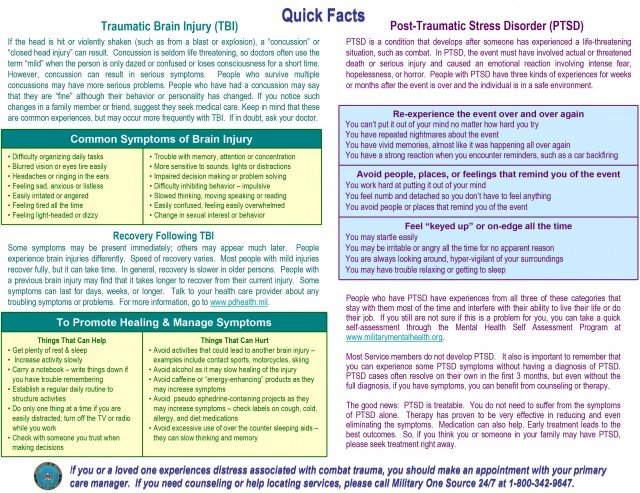 Dr. Carolyn Caldwell, a neuropsychologist assigned to Kirk U.S. Army Health Clinic at Aberdeen Proving Ground, MD, is far too familiar with the effects that TBI has on an individual and their loved ones. On a daily basis she treats the survivors of these traumatic injuries and the aftermath it creates within their occupational, social, family and interpersonal environments.

Caldwell said no matter how a mild TBI — the most common severity type — occurs, whether an IED blast, a hard hit in a football game or a fall, the impact on the injured is similar.

“The nerves or neurons in our brain can be compared to silly putty. They are very elastic and stretch easily; however, if they are stretched too far, they can break,” Caldwell said. When this happens, she added, the normal chemical and electrical functions of the brain are disrupted and can cause a person to experience physical cognitive and emotional symptoms.

For example, following a mild TBI it is common for a person to experience headache, sleep disturbance, difficulty with balance, reduced attention/concentration, reduced memory ability, irritability, and/or mood swings.

But regardless of the patient’s age or type of injury, there is one common treatment for everyone: physical and cognitive rest. With adequate rest, the brain will recover its normal chemical and electrical balance. Most individuals will recover from a mild injury within days to a few weeks.

A traumatic brain injury is a serious health concern. As a community we must remain cognizant of the seriousness of a TBI. It is within this awareness that we find a greater chance of preventing these injuries.

For more information, visit the Centers for Disease Control and Prevention’s website at www.cdc.gov and the Defense and Veterans Brain Injury Center’s website at http://dvbic.dcoe.mil.