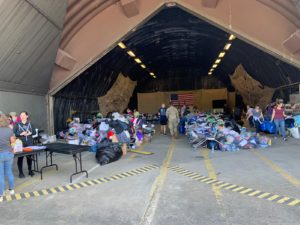 Camey McGurk was sitting in the Atlanta airport waiting for her flight back to Germany when heartbreaking images of Afghanistan began dominating her news feed.

Foreseeing an immediate need for the Afghan people evacuating from Kabul, McGurk knew she had to act now. She immediately fired a flare to her Stuttgart Community Spouses Club. In a matter of days, the team of military spouses would be responsible for sending convoy after convoy full of urgently needed donations to Ramstein Air Base.

“People were posting on social media websites that they needed help,” said McGurk, the SCSC president.

McGurk began relaying mission requirements through multiple chat groups, Forgetting, that most of her team were still sleeping in Germany, due to the time difference. By morning her team woke to a plan, and immediately the spouses of the SCSC leapt into action.

Their first task — turn the thrift shop they run on Patch Barracks into a donations center.

“We needed to start getting donations in, so we closed the thrift shop and switched to only processing donations,” said Shelley Williams, the SCSC Welfare treasurer. “The SCSC has a location and we have great volunteers.”

An assembly line was set up in the now-converted thrift shop. On the first day alone, the SCSC had 25 volunteers identifying and cataloguing donations. But while clothes were being donated in large amounts, some items remained scarce.

“We needed baby supplies,” Williams said. “We were learning of babies being born on the planes as they were coming in, we needed diapers, formula, bottles and other items for maternity and nursing.”

To meet these new demands, McGurk and Williams’ team set up a donation box at the Post Exchange. The Stuttgart community once more demonstrated their compassion – buying and donating formula, feeding items and toys for children. And as the situation continued to evolve, so did the donations. There became a serious need for blankets and jackets. The Afghans were housed in tents, and were dealing with an  unusually cool Germany after flying from a hot Afghanistan. The SCSC delivered.

“What we did was just the right thing to do,” Williams said.  “These people have just fled their homes for who knows how long, maybe forever. They don’t know where they’re going, and I just can’t imagine that.”

On Monday, Aug 24, the SCSC team were collecting donations, and by that Wednesday the SCSC had rented a cargo van and packed a convoy of six vehicles with donations and headed to Ramstein.

McGurk said her team’s thorough planning allowed them to bypass much of the red tape. “Our donations [went]straight into the hands of the evacuees,” she said.

The SCSC soon returned with two more convoys on Sunday and Monday.

Williams had no doubts that her team of spouses could get the job done, regardless of people’s prejudices and stereotypes– be that through supporting the community with scholarships and welfare funds, or helping Afghan evacuees.

“A lot of people, I think, in the past maybe have a different view of what our spouses club does, and what they’re about.” she said. “We are very much about supporting our community, it’s not about: ‘let’s dress up and have a tea party.’”

In the end, the SCSC and the Stuttgart Military Community pulled through for a people who were leaving violence for peace. Not just because they could, but because it was the right thing to do.