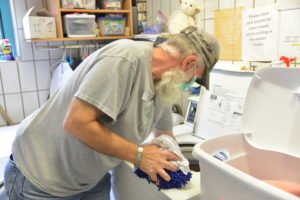 Larry Fredrick changes a load of laundry at the Patch CDC where he works as a maintenance specialist. Photo by Geoffrey Morris, USAG Stuttgart Public Affairs.

In 1975, at just 17 years old, Larry Fredrick started his career in government service by enlisting in the Army. After completing basic training at Fort Leonard Wood, he headed to Fort McClellan for computer training.

In the late 1970s, Fredrick served as a member of the Armed Forces Police Department in AWOL apprehension. Over the course of his military career, he would go on to serve in several locations, including Oregon and Korea, as an infantryman, a recruiter, and a maintenance worker.

After the military, Fredrick continued his service as a civil servant. He arrived in Stuttgart in 1992, where he has worked as a NAF employee for the past 18 years. Currently, he uses his training as a maintenance specialist at the Patch CDC. Some of his duties include: checking lights, running laundry, repairing toys, fixing furniture and equipment, and others as assigned.

In 2020 Larry Fredrick completes 45 years of service to his country and most recently as maintenance specialist at the Patch CDC. Photo by Geoffrey Morris, USAG Stuttgart Public Affairs.

Fredrick is known to come in early, sometimes several hours before the start of work. Patch CDC Manager Lynn Kraus said, “His shift starts at 8 o’clock, but he’s always here by 6:00.”

Frederick’s work ethic along with his cheerful and silly demeanor are cherished by coworkers, who said he is best described as a kooky and fun grandpa. That personality has allowed him to excel as Santa for the centers’ children every Christmas season, where he uses his snow white beard to play the part.

Recently, Fredrick was recognized for 45 years of outstanding service to his country. As he prepares to retire later this year and leave the work force behind, he sat down to answer a few questions for the Stuttgart Citizen about his time in service.

Stuttgart Citizen: How has the job changed over the past 45 years?
Fredrick: COVID has radically changed how everyone has done their jobs, and the CDC is no exception. Along with social distancing and hand-washing each room is sealed off to just the children and their caretakers and teachers. Now I have to limit my work in the class-rooms to when the kids are outside gone for the day. But I’ve worked in CYS for awhile and one thing that never changes is the commitment to the kids.

SC: What has motivated you over the years?
Fredrick: My coworkers. I cannot speak highly enough of them and everything they do.

SC: What will you do next?
Fredrick: My daughter is running the commissary in Sioux City, Iowa and my son, who was a member of the last graduating class of Patch High School in 2015, is a Ford Motors technician. I’m a proud father and now a proud grandpa to my young granddaughter named Aliyah and I’m really looking forward to being around them all again. Especially since COVID has delayed any family visits we had planned.