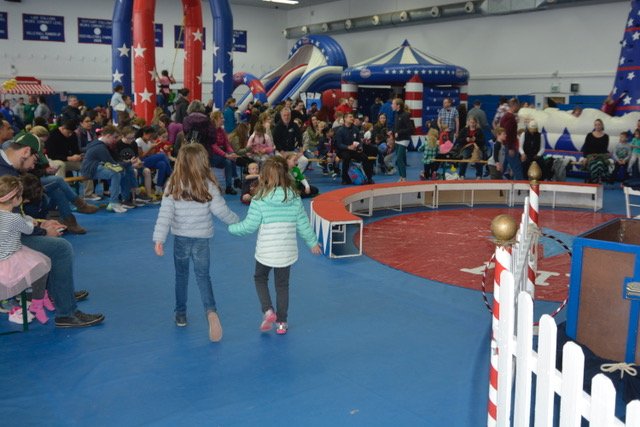 The CYS circus was in town. Specifically, the Mertz & Pilini Circus and Stuttgart military community children put on a show inside the Patch Fitness Center, entertaining hundreds of kids of all ages at the USAG Stuttgart Child Youth Services Spring Fest, April 27. 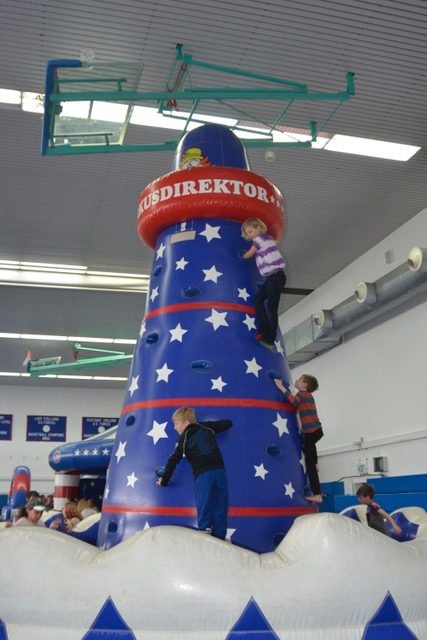 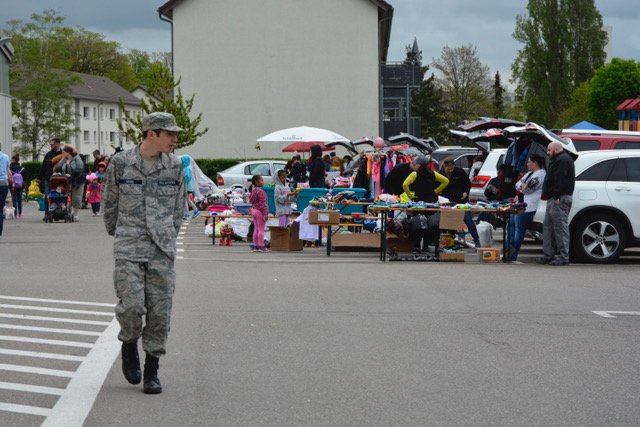 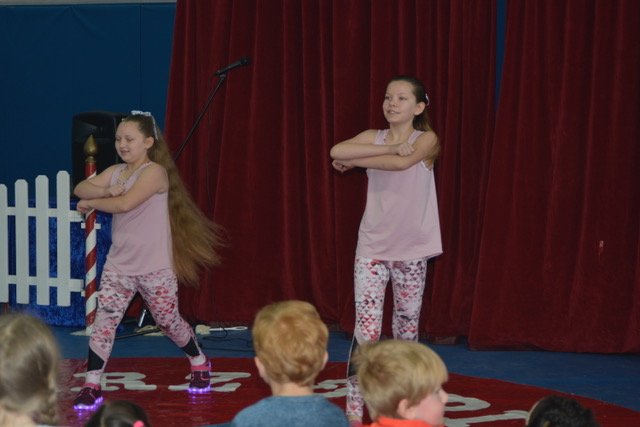 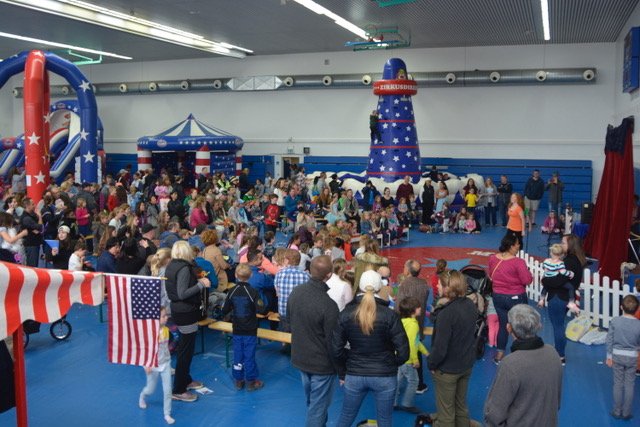 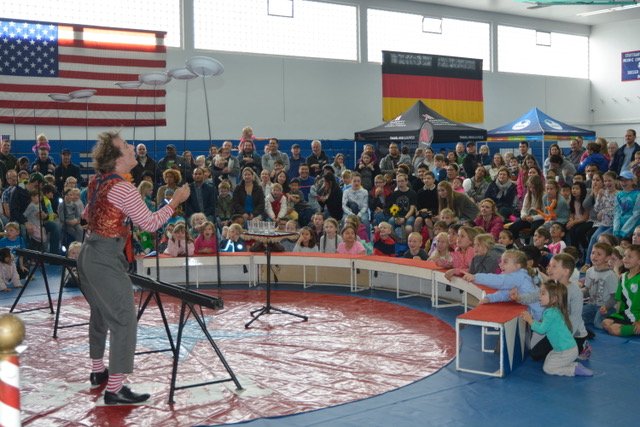 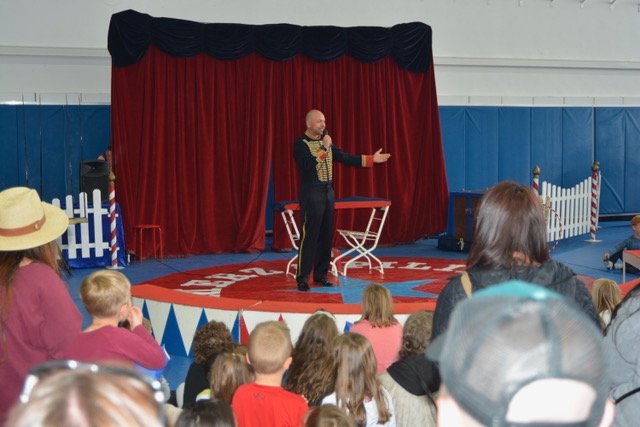 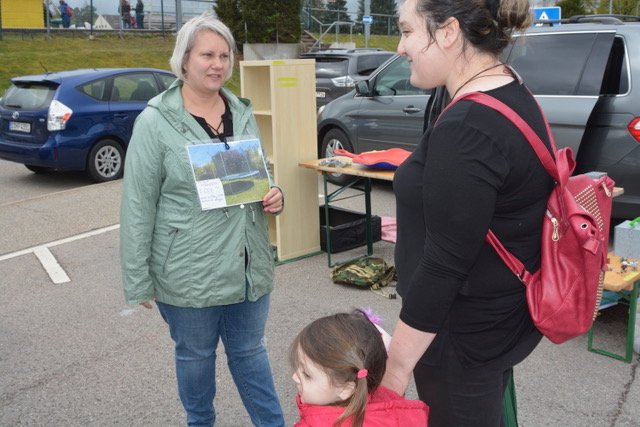 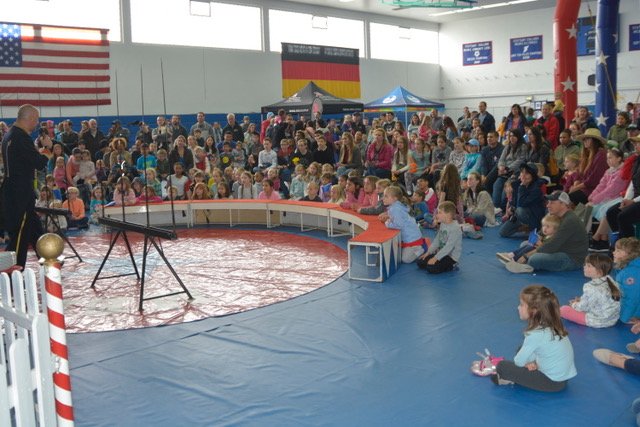 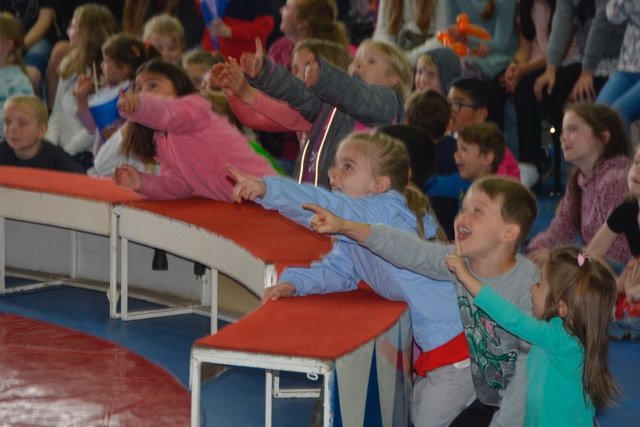 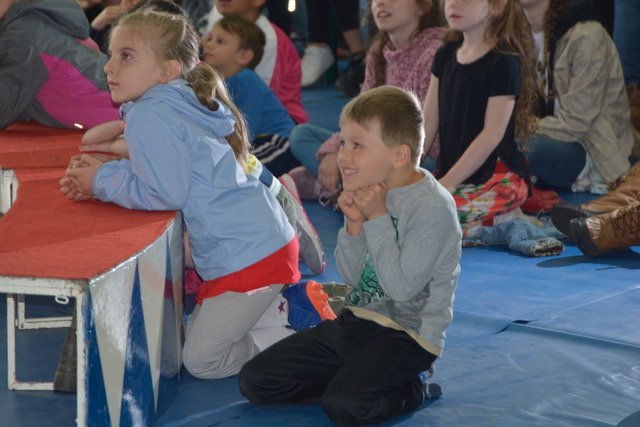 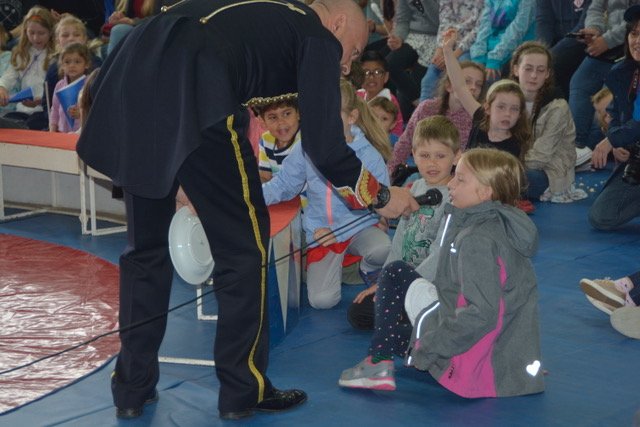 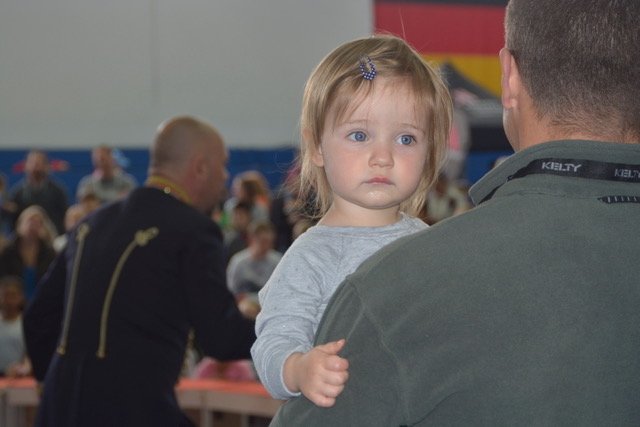 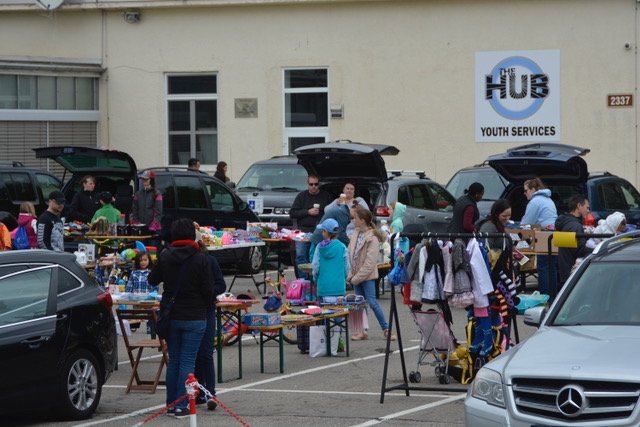 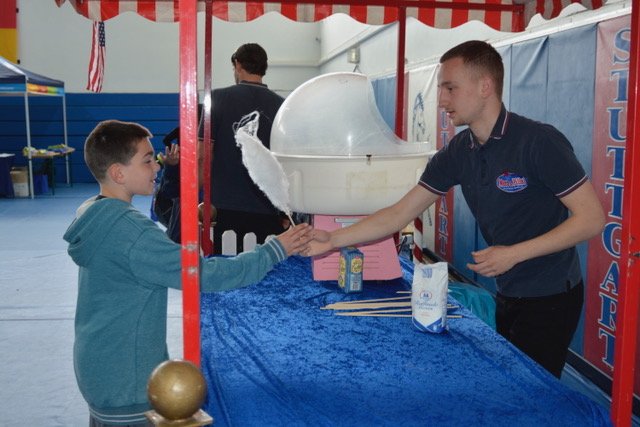 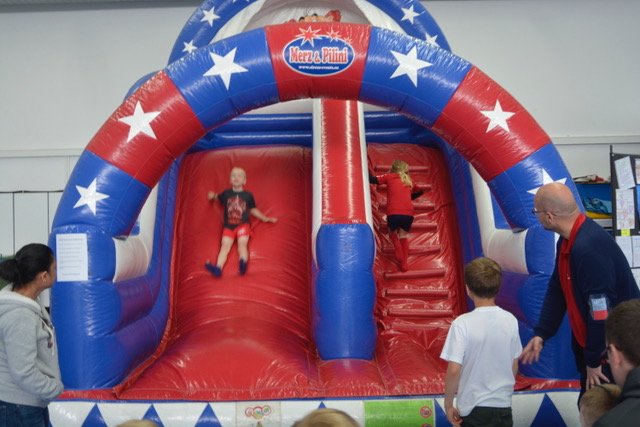 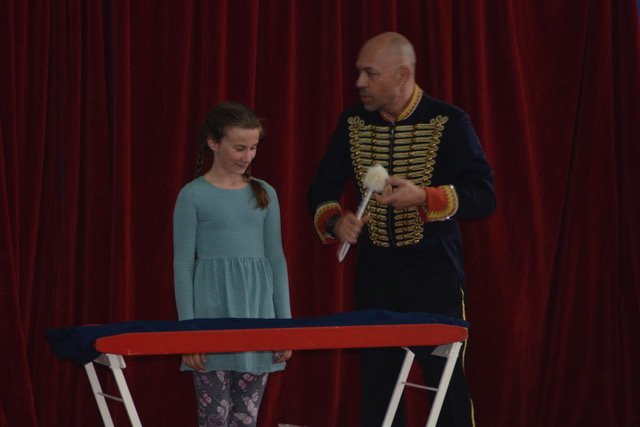 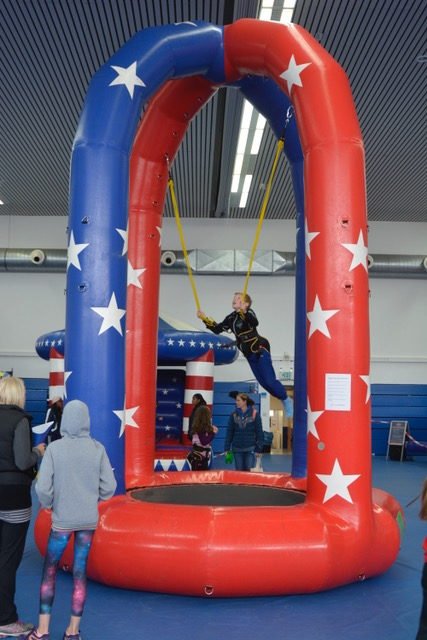 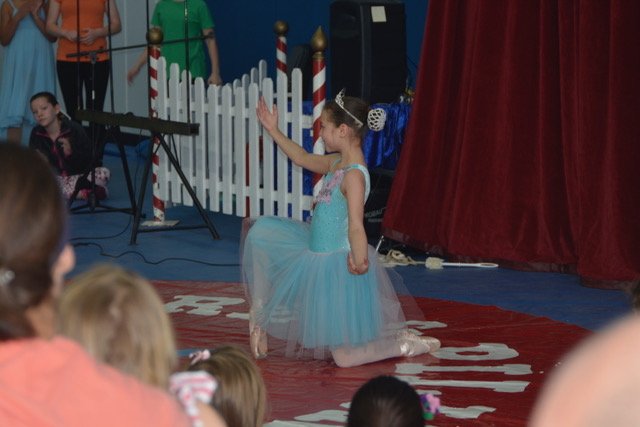 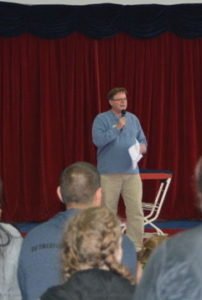 “Today is the culmination of all of our Month of the Military Child celebration and Child Abuse Prevention Month activities. We themed it ‘The Greatest Show, and we’re featuring some of our SKIES kids performing, because the theme of the s Month of the Military Child this year is ‘Military Kids Can,’” said Doug Barnes, Outreach Director, CYS. “We show off what our kids can do. The Mertz & Pilini Circus provides the professional performance and then we enhance it with our own kids.”

The show went on outside in The Hub parking lot as well at the “For KidZ Only!” flea market, a swap meet exclusively for children’s items. Both the circus-themed spring fest and the flea market were originally scheduled to be outdoors. However, the CYS event, which called for a large circus tent and big inflatables to be set up on Husky Field, was moved indoors due to a weather forecast of high winds and rain that didn’t materialize.

“We were supposed to be outside and have a big 55’ bigtop, which would’ve been the pinnacle of the whole thing, but because of the weather we moved inside,” Barnes said. “We seemed to have accommodated it really well. The kids are having a good time, everything fit inside except for the bigtop.” 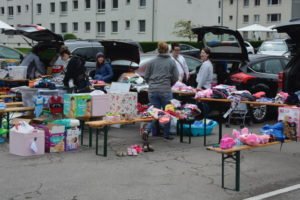 Rows of tables sell children’s treasures at the “For KidZ Only!” flea market.

Save for a few intermittent scattered drops that did little to dampen the spirit and sales at the flea market, the Saturday turned out to be a tad chilly but otherwise a nice day.

“I think [CYS] is a great organization for all of their support. I really appreciate that,” said Annie Lamp, one of the flea market participants. “They do a great job, these people, and I’m very thankful as a family person with kids.”

Family & MWR staff members worked inside and outside, ensuring sellers, buyers and sponsors were all enjoying themselves.

“We’re braving the elements trying to sell all of these cool, colorful children’s things,” said Marth Povich, FMWR event manager. “If we didn’t plan anything based on the weather, we wouldn’t be doing anything. I think we’re pretty resilient out here; these kids are having fun.” 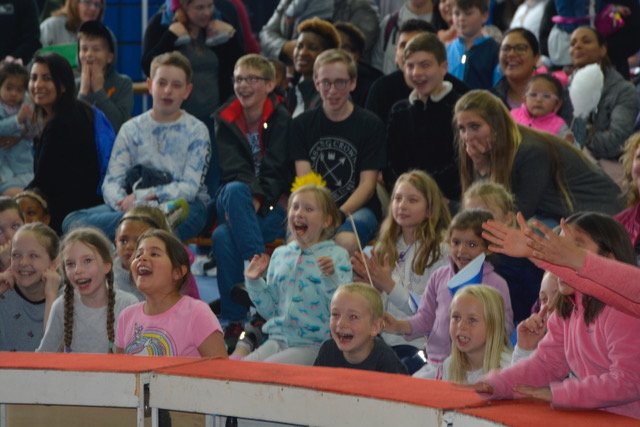 Children roar with approval at the antics of Andre the Clown.

As showtime approached, children gathered in the seats and clapped along to circus music in anticipation.

The highlight of the circus’ two performances was the old-school spinning plates routine, familiar to parents while new and thrilling for children. Ringmaster Thomas Mertz didn’t need to coax the audience to cry out warnings to Andre the Clown when a plate seemed about to fall. The kids really enjoyed it, interacting with the act in howls of delight. Other magic tricks and clowning around kept the show lively and entertaining. 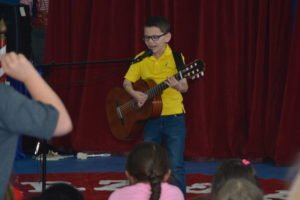 Between acts, children participating in CYS SKIES programs took to the stage in a variety of singing and dancing performances, such as Nathan Herring on guitar singing Van Morrison’s 1967 hit “Brown-eyed Girl,” with a big rock star finish, and assorted ballerinas and modern dancers.

Other CYS SKIES performers were: 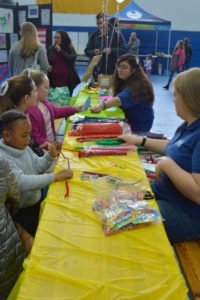 Kids learn how to make their own pinwheels and other fun activities, courtesy of the Patch Crafts Center.

Barnes said he and the rest of the CYS team enjoyed seeing the happiness of so many children.

“It gives us a lot of satisfaction. We’re giving back to the community,” Barnes said. “We’re doing what we’re supposed to be doing.”