Best of humanity displayed amid 9/11 aftermath 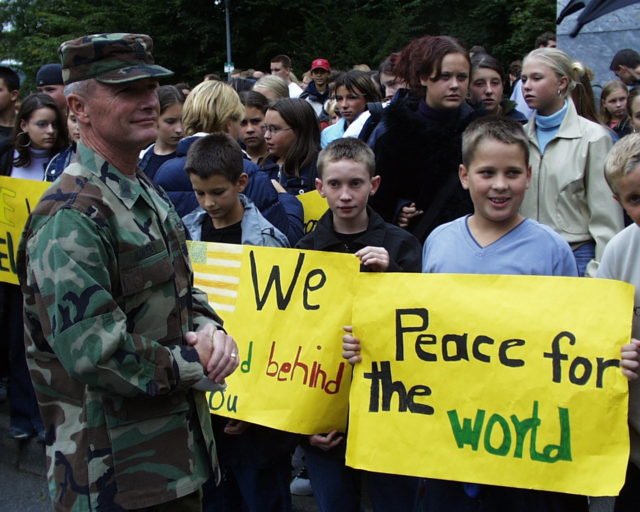 Crowds of people gathered at the gates to show solidarity with the USA.

A sleepy, normal garrison day in Stuttgart, quickly turned into one of the post’s most pivotal days. The largest terrorist attack in American history, shocked the U.S., the world and would have an everlasting effect 4000 miles away at USAG Stuttgart.

On September 11, 2001, the Stuttgart Citizen reported that the Panzer water supply had been given a clean bill of health, the law center had been honored, and that excitement was building for the upcoming Volksfest.

Then at 3.03 p.m. Stuttgart time, the first plane hit the Twin Towers in New York. By the end of the day nearly three thousand people would die in New York, Arlington, Virginia and Shanksville, Pennsylvania

The-garrison commander Col. Larry Stubblefield answers questions in the melee of public support outside of the gate at Patch Barracks, posed to him by Air Force Major Pierson, of the American Forces Network.

Then-Garrison Commander Col. Larry Stubblefield, one year into his command, had to quickly replace his mayor hat for Army kevlar.

“That first year was really like being the mayor of a city, doing all the things that a mayor would do, throwing out the first pitch, going to community events, and then all of a sudden 9/11.” said Stubblefield who is now a senior leader at the Small Business Administration. “I can’t understate the amount of concern there was. A lot of uncertainty, a lot of fear, and we switched from being an open community base, the headquarters, to really being in a defensive posture.”

Stubblefield recounted a frenetic atmosphere in the days following the attacks. But when pulling out of Patch barracks to attend one of hundreds of emergency meetings, he came face-to-face with an overwhelming display of public support that stopped him in his tracks. Local residents had gathered in their hundreds at the gate.

“I was doing a radio interview in the car, and this whole sea of young people were out here, waving American flags. People were holding signs saying ‘We will help you,’ ‘We are all Americans,” and ‘We stand behind you,’” Stubblefield said. “So I said ‘hey, I’m gonna have to get out here real quick.’”

Stubblefield waded into the crowd and was soon surrounded by a sea of locals, young and old alike. It was an emotional moment for the commander.

“There was a lot of hand shaking and embracing,” Stubblefield said. “Just to know that they cared and that they were standing with us. I will never ever forget that.”

Stubblefield knew even before he reached out asking for security support, that the Germans were going to stand shoulder-to-shoulder with him and thousands of Americans on post.

“I asked them, will you stand with us? This is an attack against Americans, you’ve been our friends for 60 years and we need you now.” Stubblefield said at the time.

The German Army, and police were already planning their response. Just ten minutes after the news of the attacks, German Soldiers and fighting vehicles were on hand to bolster post security, including a contingent of police on horseback. The Germans stood guard at the gates alongside their US counterparts day and night for weeks.

Those gates, in sharp contrast to the heavy military presence, began to look like  memorial shrines. The Citizen reported “flowers, candles, and notes of sympathy were carefully placed while community letters flooded in.” Local mayors expressed their support and friendship with then-Boblingen Lord Mayor Alexander Vogelsang writing to the newspaper with these words:

“We mourn with the American people. Our solidarity, particular in these sad times, applies especially to the Soldiers stationed in Boblingen. Should you need our support in any form or shape, we would gladly extend it to you.”

Other letters stated “Churches pray for victims,” and “Daimler-Chrysler expresses shock.” Daimler-Chysler would later go on to donate $10 million to affected children in the states, while a school in Mohringen collected teddy bears to send to American kids.

German business also held moments of silence, including a 5 minute silence at the Porsche headquarters. The Citizen reported that only the sound of sobbing could be heard. On Sept. 12 at 6 p.m. every church bell in Stuttgart rang out in unison.

Crowds of people gathered at the gates to show solidarity with the USA.

Undaunted by the terrorist attacks, the Stuttgart Military Community was determined to bring things back to normal — no terrorist could destroy the American way of life.

In two days the students would return to class, The Citizen reported that school nurses went from class to class checking on their well being. Guidance counsellor Phyllis Smith said many students felt both “angry and sad.”

But fear and anger did not paralyze the students or the community. The kids, parents, service members and civilians were able to turn their anger and sadness into a positive force.

The Stuttgart cheerleaders’ fundraiser which had raised $2,300 for new uniforms was instead diverted to the American Red Cross. AAFES and the commissary kept the military police guarding the post — German and American — fed, and community members delivered home cooked hot meals around the clock. The Kelley Theater that had been on the chopping block, rather than being closed, received an infusion of $400,000 becoming a hub for expression, joy and creativity in a time of darkness.

6th Area Support Group Family life Chaplain Stephen Kelley told the Citizen he was unsurprised by the acts of generosity.

“We’ve seen the worst of humanity,” Kelley said. “It’s our responsibility as Americans to show the best of humanity.”

This article contains excerpts from the Stuttgart Citizen archives published on Sept 11 and 25, 2001. Contributing staff writers to these stories include Julie Ayers, and Hugh McBride