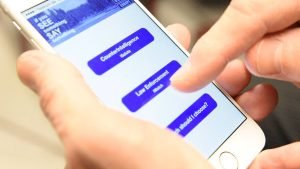 Know who to report suspicious activities or behavior to. Use U.S. Army Europe’s iReport website, www.eur.army.mil/iReport/ or mobile app to submit information to counterintelligence or law enforcement officials.

August is Antiterrorism Awareness Month for the U.S. Army,

Antiterrorism is the defensive element of the nation’s fight against terrorists through measures taken to detect, deter and defend against potential or actual terrorist plans or actions according to Keith Horne, force protection specialist for U.S. Army Europe’s Antiterrorism Division.

Horne said terrorism has always been a threat to the U.S. forces community, and perhaps a greater threat to military communities outside the U.S. He said that U.S. service members could be in danger even when they are not the terrorists’ intended target.

“There continue to be threats within Europe, and what is most important to understand is that terrorism can happen anytime and anywhere,” Horne said. “Members of our U.S. forces community must continue to be aware of local threats and strive to maintain heightened awareness to detect terrorist activities.

One way the community can maintain their awareness is to follow U.S. Army Europe’s Antiterrorism Division on their Facebook or Twitter accounts, at www.facebook.com/StaySafeAntiterrorism and www.twitter.com/StaySafeEurope. Both accounts are updated often with current and relevant force protection related information.

“The month of August is popular for vacations for most of Europe,” Horne continued. “There will undoubtedly be higher numbers of travelers visiting popular tourist destinations throughout Europe and with that comes an increased potential for terrorist related incidents.”

Horne recommends families have plans already identified and practiced such as communications plans in the event families become separated, and to have pre-determined rally locations easily understood by all members of the family.

There are many resources available to help service members and their families stationed in Europe stay safe.

Employees can register themselves and family members in order to receive community specific messages and alerts via email, text messages or phone calls via the AtHoc system. Find links to self-register at www.eur.army.mil/travelsafe/. Listen to your local AFN radio station at www.afneurope.net for news updates.

Register any travel away from their duty station with the State Department’s Smart Traveler Enrollment Program, or STEP. More information is available at https://step.state.gov/step/.

In the event of an incident nearby, use social media like Facebook’s Safety Check to let loved ones know you are okay. Check in with your chain of command or supervisor in case there is an accountability check.

The Army’s Ready Army website, www.acsim.army.mil/readyarmy, provides families with targeted preparedness information so they can be informed, make a plan, build an emergency kit and get involved.

Know who to report suspicious activities or behavior to. Use U.S. Army Europe’s iReport website, www.eur.army.mil/iReport/ or mobile app to submit information to counterintelligence or law enforcement officials.

Use mobile alerts to English language news sources in Europe such as CNN, BBC, or The Local to stay informed on the go. Follow your unit’s or garrison’s social media presences for local updates.