This article is being updated to reflect new measures announced on October 28, which are scheduled to take effect November 2.

This information is provided as a courtesy to the Stuttgart military community and is not authoritative.

The government of Baden-Württemberg declared the current COVID-19 situation in the state to be at the “critical” stage, or the highest of its three-stage status indicator system, as of Monday, October 19. New regulations aimed at reducing the spread of the virus have consequently come into force.

The same guidelines now apply throughout the state of Baden-Württemberg:

A maximum of ten people from different households are allowed to meet, whether in public or private, for gatherings or private celebrations (such as a birthday party).

More than ten people are allowed to meet only if they are family relations or come from a maximum of two households. There is no longer a distinction between private rooms and rented spaces. Additionally, children do count as individuals for the purposes of this regulation.

Masks must be worn throughout the state in areas dedicated to pedestrian traffic, such as pedestrian zones and marketplaces, and anywhere open to the public where minimum distancing cannot be reliably maintained.

They must be worn in public transit (both inside vehicles and at stations/stops), inside shops and shopping centers, and in bars and restaurants when not seated at the table.

The requirements apply to everyone over six years old. In the absence of a mask (for example, if you’ve forgotten one), a scarf or similar facial protection is permitted, as long as the mouth and nose are covered.

Mask zones are now in effect in the city centers of several local municipalities, where pedestrian traffic is highest and distance is more difficult to maintain.

In Stuttgart, there is a mask requirement in the city center (within the “City Ring”) for anyone over six years of age, including Schlossplatz, Marktplatz, and Königstrasse – essentially, the busiest part of the city, where sufficient distance from other people cannot always be maintained. Wearing a mask is mandatory at public events throughout the entire city, as well as at weekly markets and places they are already required, such as shops and restaurants. The mask is not required when eating, drinking, jogging, or biking. 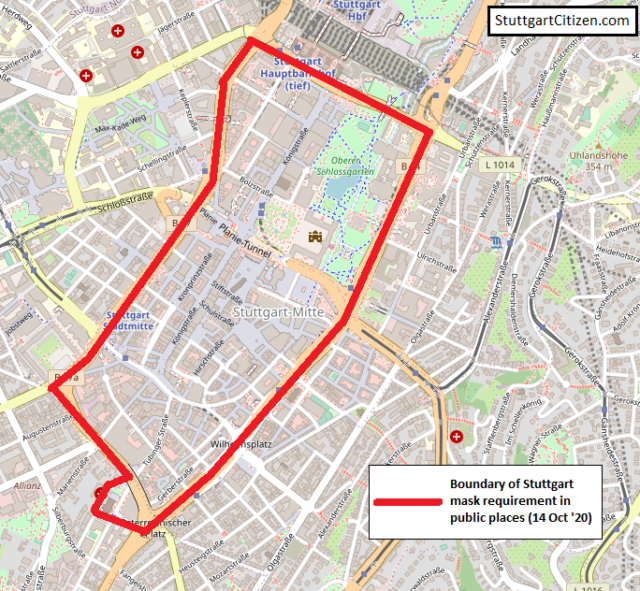 The red box shows the area of downtown Stuttgart in which a mask requirement and late night public drinking ban is in effect from Wednesday, October 14.

Effective from October 22 (and initially, through November 8), the city of Stuttgart has instituted a curfew for restaurants and bars from 11 p.m. to 6 a.m.

The city has also implementing rules that restrict the sale of alcoholic beverages on Thursdays, Fridays, and Saturdays from 9 p.m. through the following morning. Consuming alcohol in public will be prohibited within the City Ring, as well in a number of parks and plazas in other areas of town, from 11 p.m. on Thursdays, Fridays, and Saturdays. From October 22, “to go” sales of alcoholic beverages from restaurants is prohibited around the clock. 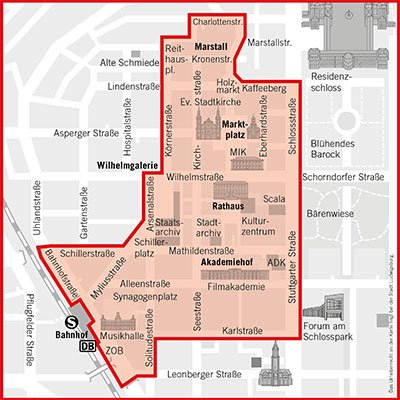 The above map shows the area in which a mouth-and-nose cover must be worn in the city of Ludwigsburg.

Visiting restaurants, museums, and similar places typically requires providing personal data such as name, address, and phone number/email address to facilitate contact tracing in the event of an outbreak at that time and location.

Individuals who refuse to provide this information will be denied entry to the location, and providing false information is punishable by a fine.

Data protection laws require this information to be strictly safeguarded and used for the sole purpose of providing information to the public health department or local police authority in accordance with legal requirements in the event of an outbreak. The data is stored for four weeks and then deleted; the law requires that unauthorized persons do not have access to the records.

The federal and state governments have asked for citizens to avoid unnecessary travel to and from areas with high numbers of infections, including domestic travel. Most German states have implemented an overnight accommodation ban on tourists coming from so-called hot spots unless they can produce negative test results no more than 48 hours old. However, the overnight accommodation ban in Baden-Württemberg was struck down by a court on October 15.  The status of these bans in other areas of the country is currently subject to legal challenges.