Despite COVID, Stuttgart students keep calm and carry on with college plans 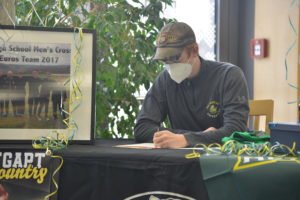 Stuttgart High School senior Jackson Barriger has been in touch with college athletic recruiters since his sophomore year. And yet, when it came to deciding which university to attend, one major consideration for the 2021 graduate was the possibility of college life without competing in his sports.

“I really want to run in college, but I also had to find a college where, God forbid, something happens like COVID sticks around, or I get injured or something, where I can actually be happy in the area and at the school without having athletics,” said Barriger.

The track and cross country athlete’s thinking—particularly in the wake of a track season canceled due to coronavirus concerns—brings to light the extent to which the pandemic has shaped the current post-high school planning process and how local college-bound seniors have tried to clear its hurdles.

On-site campus visits, for example, remain limited or suspended at many schools in the U.S. and abroad, and international travel restrictions (including quarantine requirements) mean they can be impractical for Stuttgart-based students even when they are technically possible.

But, with a year since the onset of the pandemic, schools have had time to improve their online presence and in-person safety procedures for a new crop of prospective students.

Nearly all of Barriger’s prospective colleges have virtual tours on their websites, which he said made it easy to get a feel for each school and narrow down the most serious options. As a recruiting prospect, he was able to join in a school-sponsored November visit to his eventual pick, Methodist University, with rigid scheduling and adherence to safety protocols.

SHS senior Gina Forzano, who spoke to the Citizen earlier this year about the challenges of creating the school yearbook amid the impacts of coronavirus, also felt the effects firsthand on her college search, being unable to visit potential schools in the United States  and United Kingdom.

Changes to standardized testing schedules led to one fewer SAT attempts for Forzano, and a switch to an online format for Advanced Placement (AP) tests led to her scores being “not as high as I’d have liked them to be,” she said.

And although she was “lucky enough that the teacher I asked for a recommendation, I’ve known for three or four years,” the nature of spending so much time in remote learning this year could potentially be a disadvantage for some students.

“You don’t have a lot of class in person when you can see the teacher face-to-face, so you don’t have as much of the teacher’s recognition of your skill set, and what you’re able to work through on your own, and what they need to help you with,” said Forzano.

Conversely, far from harming his chances with athletic recruiting, Barriger believes the circumstances following the cancellation of the school track season could have even given him an edge—allowing him to demonstrate his work rate and determination.

“When we didn’t have a track season [in fall 2020], when that got canceled, I continued training,” he said, having participated in a virtual season which involved running races independently and uploading documentation of his performance. “I just trained as if there was a season, and they were really impressed by that.”

“I think right now, it’s really very important to be flexible and to have the ability to adapt, and I think it’s also really important to develop those habits of discipline” when it comes to online classes, said Bal.

Stuttgart High School Senior Gina Forzano holds up an acceptance email she received to Bath Spa University in the United Kingdom, where she will study creative writing in the fall. Photo courtesy of Gina Forzano

Bal encourages college-bound students to take into account the variety of educational options available to them, which include traditional brick and mortar colleges as well as online campuses (some of which have mixed methods of instruction), and decide which sort of experience they want.

For those going the ‘traditional’ on-campus route, Bal suggests taking into account the methods of instruction, as well as procedures in place to protect from COVID-19 transmission.

“Many universities have different measures in place to teach back in class again, even though there may be limited class sizes, and some of them will still allow you the option to attend that class online,” said Bal. “Most schools have a pretty good handle on transitioning to online learning since they’ve done it before, so for me, it is definitely about the hygiene measures. Are they requiring masks, or taking temperatures?”

Speaking anecdotally, Bal feels students are being more flexible now in terms of what they want in a college experience, and more willing to take their time with making a choice. That could mean looking at European schools, opportunities on post like the Embry-Riddle campus, or some other temporary college enrollment option to stay closer to family for the time being.

And some college decision factors would not necessarily have been considered pre-COVID, like the speed of the dormitory internet and its ability to handle the load of residents all streaming virtual courses simultaneously, she added.

For her part, Forzano, who will move to the U.K. in September to start a creative writing degree at Bath Spa University, has a tempered optimism about conditions in the fall.

“Seeing as we’re supposed to have the majority of people vaccinated by then, supposedly, I’m hoping that we’ll be able to actually meet in person for workshops,” said Forzano, who added she will continue to prepare for the possibility that her college career might begin virtually.