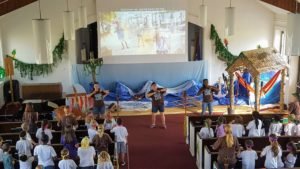 After a few years’ hiatus, the five-day summer program returned to the RB Chapel with music, bible stories, and an array of activities. This year’s theme, “Shipwreck: Jesus Rescues,” taught children that through daily challenges, God can rescue them.

“The theme ‘Shipwrecked: Jesus Rescues’ is really important, especially for the military community. It addressed daily issues such as loneliness and worrisome. When those issues occur, Jesus rescues,” said Brian Merry, USAG Stuttgart Religious Support Office. “Those are things that the kids can relate to when they’re moving around and trying to make new friends.” 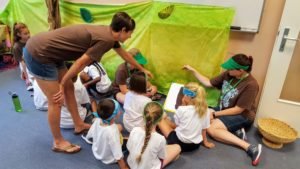 Adult and youth volunteers rotated some 60 children through four different stations. At each of the stations, the children participated in group discussions and hands-on educational activities as well as experiencing religious-themed topics such as Bible Discovery, Imagination Station, KidVid Cinema and Ship Rec Games.

VBS is also supporting the religious support office’s special outreach mission on Haiti. At the KidVid Cinema station, the children watched a short video that not only incorporated the theme for each day, but it also helped the children connect with what is going on in the world. 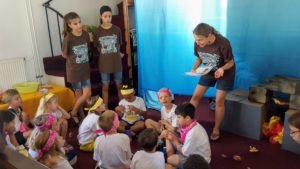 “The video helped them understand what people in Haiti are going through with the turmoil and recovery of the hurricane and the devastation that has hit the island,” stated Merry.

For more information about the USAG Stuttgart Religious Support Office and its programs, visit: www.stuttgart.army.mil/services-rso.html.