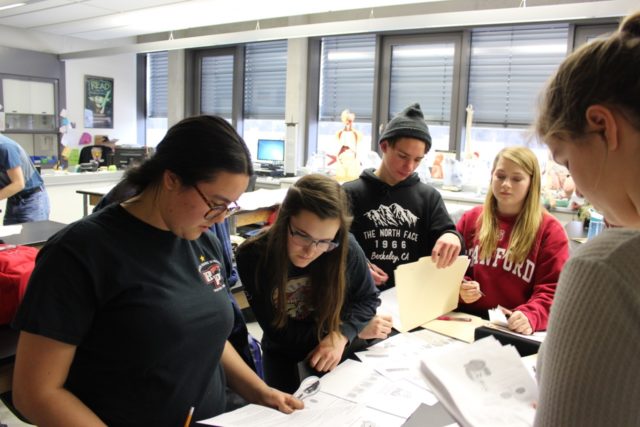 SHS students sift through evidence to solve a simulated crime practical, March 3. The junior sleuths received a week of training in forensic science from a Stuttgart CID agent. Photo by Alaynah Luttrull

Many people are familiar with these television shows, but they don’t understand the science used by the crime-fighting main characters.

From Feb. 27 to March 4, the break between high school winter and spring sports seasons (also known as “dead week,” a fitting name considering the focus of the class), a select group of students had the opportunity to learn about forensic science and how it is used judicially.

Catching the bad guy is not as easy as Hollywood makes it seem. Fortunately for the students, the Criminal Investigation Command (CID) in Stuttgart spared an agent to teach a class on forensic science.

Forensic science is important in the judicial and crime fighting world because it helps investigators better understand the physical evidence that they discover and use the small, minute details to ultimately catch the bad guys.

The CID special agent who taught the class is a forensic science technician with training in many forensic disciplines. He generously shared his knowledge with the students of SHS teacher Stephanie Payne. Students stayed after school every day for a week to learn about crime scenes, photographing evidence and the importance of light, trace evidence, blood patterns and forensic entomology. The students learned about the misconception many jurors have of the forensic field due to the “CSI Effect,” which refers to the idea that real-world forensics happen the same as they appear to on television. They also learned how to photograph evidence properly, how to use light to investigative advantage, and how trace evidence, blood patterns, and insects are used to solve a case.

“This is a community outreach for (the CID office),” the agent said. “We wanted to try to elicit some interest in the forensic field and give students an understanding of how this science applies to law enforcement.” 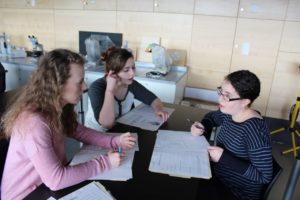 With their new skills, SHS students use forensic science to catch a bad guy during an exercise. By Alaynah Luttrull

How forensics works in law enforcement became increasingly clear to the students as they studied the pragmatic application of their newfound skills. Many students felt the most prominent skill is the ability to look at the minute details and put together the puzzle of a crime scene.

The students’ fresh-learned skills were put to the test, March 3, during their final exercise, a “practical.” In this practical, members of the CID office simulated a murder case and students tried to solve who committed the crime. Students were given a case file and spent time looking at the murder scene with their team, searching for evidence and clues that allowed them to piece together what had happened. After observing the scene, the teams moved through stations manned by agents of the CID, where they used multiple methods of examination – from fingerprinting to UV light – to understand the physical evidence they had collected. While not all the teams came to the correct conclusion about the case, having the opportunity to put all the information they’d learned in a simulated incident was an amazing experience.

“My favorite part was learning about all the different aspects of forensic science, and how (the CID agent) took stereotypes and showed us the reality,” recounted Clare Walls, SHS junior. “I one hundred percent had fun!”

Note: The CID agent requested anonymity due to the sensitive nature of his work.