Ask a Jag, News, PCS Out 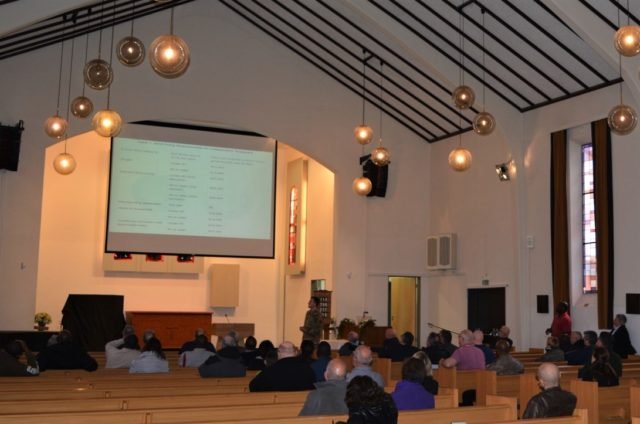 Retirees and family members gathered in the Panzer Chapel to learn about how being retired in Germany is affected by the IRS, healthcare and more. Photos by John Arnold 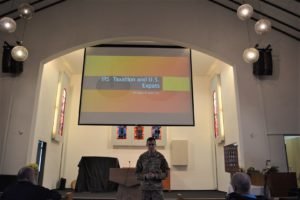 “As service members approach retirement from active duty service, they will have some important decisions to make regarding healthcare coverage,” Gaelon said.

For the latest Tricare information on transitioning from Active Duty to retirement visit www.tricare.mil/briefings. Briefings are continuously updated as benefit changes occur.

Stuttgart’s Retirement Services Officer Augustus Norvel concluded the event giving thanks to all speakers and retirees that took time out of their schedule to attend the town hall meeting.

“The Retiree Council and myself look forward to seeing even more retiree participants at the next Retiree town hall meeting,” Norvel said.  “The council is always seeking garrison professionals who have retired from the military, but are active in the government civilian workforce. We are also seeking retirees who reside in the commuting area who can make great contributions to the welfare of our honorable retirees in the Stuttgart community.”

The presentation concluded with the quote by Benjamin Franklin, “In this world nothing can be said to be certain, except death and taxes,” enforcing the message the from legal center strongly advising personnel not to get into stuck with unpaid taxes and penalties.

Those interested in becoming a member of the USAG Stuttgart Retiree Council can email, or call 431-2010 or 07031-15-2010. Service members may also stop by Army Community Service, Bldg. 2915, Panzer Kaserne, for transition assistance information.

The Citizen - Welcome to Stuttgart 2020