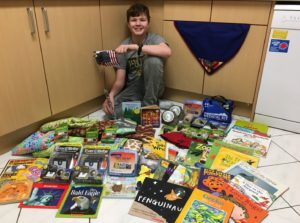 Ben Ringquist helped fund more than 100 Euros worth of soap, mosquito nets, and topical medicines for a group of 75 street children in Chad. Photo courtesy of Ringquist family.

When Ben Ringquist heard how commonplace it is in Chad for hungry orphans to sleep outside shops in the dirt, he found a cause.

His father, Lt. Col. John Rinquist, who had been on duty in the central African country, had told Ben, 13, how the lucky kids have sleeping mats, but must roll them up and hide them in trees during daylight — hoping that their sole possession isn’t stolen.

“I wanted to help children,” Ben Ringquist said. “It’s hard to believe some grow up in these conditions. I wanted to make their lives just a little better.”

April is Month of the Military Child — a time to appreciate and honor the sacrifices made by children of service members and the challenges they overcome.

“I don’t have an area you would call home,” Ben said, adding that the hardest part of moving is integrating into a new school. “I have to make new friends.”

The Ringquist family maintains a 15-year tradition of giving back. Each year, around the winter holiday season, Ben chooses a cause that he and his family are going to donate to by way of time, resources or money.

Next, he researches the best ways to help their chosen cause and decides what form the family’s donation will take. Previous recipients include local artisans, a few 5-k charity races, and a housekeeper in Nigeria who wanted to start her own business.

This year, Ben donated to a clinic in Chad, which serves over 300 displaced children, specifically former child soldiers and former sex workers between the ages of seven and 15, providing them with resettlement assistance and education. 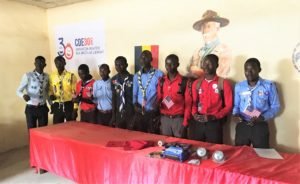 His father personally delivered the supplies to Ben’s chosen NGO and the Boy Scouts of Chad. “He’s resilient. He’s curious, empathetic, and infinitely creative,” his father said. “He wants to make the world a better place.”

Tags: Boy Scouts × Military Child of the Month × The Citizen May 2020