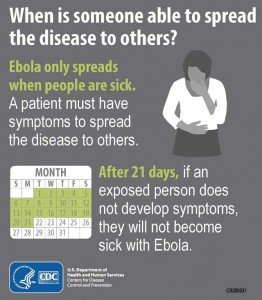 The Ebola outbreak that is currently reported as a global health emergency by the World Health Organization is centered on four countries in West Africa: Liberia, Guinea, Sierra Leone and Nigeria.

At this time, there have been no reported cases of Ebola in Europe. The Stuttgart Army Health Clinic staff remains trained and prepared to respond to Ebola in the unlikely event that an individual becomes infected.

Becoming infected with Ebola virus is extremely rare, particularly in the United States and Western Europe, in part due to standardized infection control practices. Ebola virus can only be transmitted to others through direct contact with blood or body fluids from an infected person or exposure to objects (such as needles) that have been contaminated with infected fluids. Only symptomatic persons infected with Ebola can transmit the virus.

Ebola virus disease (formerly known as Ebola hemorrhagic fever) is a severe, often fatal illness in humans and nonhuman primates, with a death rate of up to 90 percent. This current outbreak has a lower case fatality rate than previous outbreaks, at approximately 53 percent. The Ebola virus is transmitted human to human. Ebola outbreaks occur primarily in remote villages in Central and East Africa near tropical rainforests. The current outbreak is the first one known to occur in the West.

According to the National Center for Medical Intelligence, the risk of Ebola transmission to U.S. personnel in the West Africa area is low, even during an extensive outbreak in the local population. Casual contact does not transmit infection. Person-to-person transmission requires direct contact with the blood or bodily fluids of an ill patient, as people are not contagious until symptoms appear.

Symptoms of Ebola may appear anywhere from 2 to 21 days after exposure to the virus and typically include fever, headache, vomiting, diarrhea, muscle pain, stomach pain, unexplained bleeding or bruising.

There is no Federal Drug Admin-istration approved medication or vaccine currently available to protect against Ebola infection. Standard treatment for Ebola is still limited to supportive therapy. This consists of balancing the patient’s fluids and electrolytes, maintaining their oxygen status and blood pressure, and treating them for any complicating infections.

In summary, there are no reported cases in the European region; the risk would still be low (negligible) even if there were cases in Europe, according Lt. Col. (Dr.) Pamela Ward-Demo, Infectious Disease Physician from the Office of the Command Surgeon at U.S. Africa Command. Ebola is not airborne and can only be transmitted by direct contact with the body fluids of a person who is sick with the disease.

For those who have recently (in the past three weeks) returned from Guinea, Liberia, Sierra Leone, or Nigeria and are experiencing fever and/or other symptoms listed above, contact the Stuttgart Army Health Clinic at DSN 590-1600/civ. 06370-9464-1600 before coming to the clinic.

If you need assistance outside of normal duty hours, please contact the Stuttgart Military Police at 0711-680-5262 or Emergency DSN 114.

Where to get more information
For up-to-date information regarding the Ebola outbreak, visit the Centers for Disease Control and Prevention at www.cdc.gov or the World Health Organization at www.who.int.

To learn more about what the Army is doing to assist the Ebola outbreak, visit http://phc.amedd.army.mil.