Hope for a new generation, Byrnes’ Speech of Hope at 70 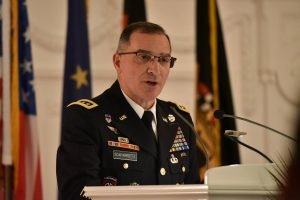 Gen. Curtis M. Scaparrotti, commander U.S. European Command, speaks at the 70th anniversary of the “Speech of Hope,” given by then U.S. Secretary of State James F. Byrnes on Oct. 7, 2016, hosted by members of the Deutsch-Amerikanisches Zentrum / James-F.-Byrnes-Institut (DAZ) and the Baden-Württemberg Staatskanzlei, or State Chancellery. Photo by U.S. Consulate General Frankfurt

The 70th anniversary of the “Speech of Hope,” given by then U.S. Secretary of State James F. Byrnes on Sept. 6, 1946, was celebrated in Stuttgart, Oct. 7, hosted by the Deutsch-Amerikanisches Zentrum / James-F.-Byrnes-Institut (DAZ) and the Baden-Württemberg Staatskanzlei, or State Chancellery.
Gen. Curtis M. Scaparrotti, commander U.S. European Command,  was an honored guest and speaker at the event along with Ambassador John B. Emerson, U.S. Embassy Berlin, Prime Minister Winfried Kretschmann, the Chairman of the Munich Security Conference Wolfgang Ischinger, former German Ambassador to the United States, and Dr. Rudolf Böhmler, chairman of the board of the DAZ. All speakers gave an overview on German-American relations following World War II. They emphasized the importance of passing the lessons learned and the respective values when it comes to transatlantic relationships on to the next generation.
“Germany is today an indispensable partner in promoting global security and prosperity, and in protecting democracy and the freedom, dignity, and human rights of all peoples,” said Emerson during the program’s opening remarks. “Our true partnership is not an inherited trait; its value needs to be transmitted from one generation to the next…if we are to keep strong a strong bridge created by those bonds, we need to reach out to those generations,” he added.

Students of the International School of Stuttgart and Stuttgart High School entertain the audience with a jazz performance at the celebration of the 70th anniversary of the Speech of Hope in Stuttgart, Oct. 7, 2016. Photo by the U.S. Consulate General Frankfurt

School groups from all over Baden-Württemberg participated in the event with jazz entertainment, which included students from Stuttgart High School on Panzer Kaserne,  and contribution to the dialogue of the evening as they recited their views of the future of transatlantic partnerships.

“On September 6, 1946, an American journalist covering the visit of U.S. Secretary of State James F. Byrnes to Stuttgart described the once so prosperous city, the ‘Geburtsstadt des Automobils,’ as a skeleton of the flourishing city it once was. The spirits of the inhabitants were just as shattered as the city. Throughout Germany, people needed food, a roof over their heads, jobs – and most of all, they needed hope. On that day, amidst the rubble and despair of postwar Germany, Secretary Byrnes helped to set the course for a new way forward…Today, in all 16 ‘Bundesländer,’ or federal states, ‘Einigkeit und Recht und Freiheit’ are givens. And as Bundestagspräsident Norbert Lammert said on Monday in Dresden at the Tag der Deutschen Einheit, or Germany’s Unification Day, Germany may not be a paradise on earth, but for many people around the world, it comes very, very close,” Emerson said.