Garrison unleashes the ‘tigers’ against COVID-19 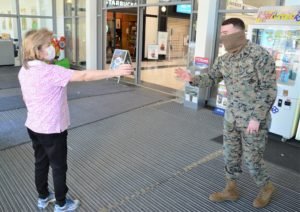 The U.S. Army Garrison- Stuttgart’s combined military and civilian “tiger” team, has been in place — and in public – since mid-March.

Prior to the height of the emergency, Col. Jason Condrey and Command Sgt. Maj. Toese Tia, the garrison command team, knew that education and information would be key to combatting the virus. Screeners would help with that effort. Garrison leaders addressed the challenge by making sure screeners were at the gates and essential services, such as the commissary and Exchange, explained Capt. Carlie Wilson, commander, Headquarters and Headquarters Company, USAG Stuttgart.

“Col. Condrey wanted to make sure we were safeguarding the community and effectively using available personnel,” Wilson said.

“We determined that using internal garrison employees would allow us to maintain safe procedures and best protect garrison essential services while also ensuring the combatant commands and other mission partners maintained their ability to conduct their daily mission requirements,” Wilson said. “We realized that screeners were going to be an enduring requirement and we needed to build redundancy among the screener teams to be able to execute the mission.” 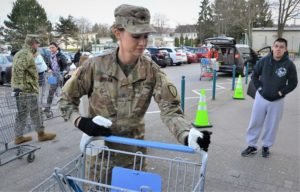 Many different ideas and approaches were considered, Wilson said, leading to the creation of a tiger team from garrison personnel who were not able to perform their normal jobs due to COVID-19 imposed restrictions.

“The garrison needed to pull together a team to tackle the unique problem sets created by the COVID-19 pandemic,” Wilson explained. “Col. Condrey and the leadership identified groups of willing and able USAG-Stuttgart employees who resolutely embraced tasks assigned outside their normal duty positions, such as the screening jobs at the mission essential services.”

Identifying personnel to meet the COVID-19 demands was one of the ways the commander leveraged the garrison team to protect essential services on the installation for community members, Wilson said. The tiger teams were created to meet the commander’s and USAREUR’s intent to safeguard the community while ensuring mission readiness.

“We also have other directorates providing personnel who are acting similar to a tiger team, but are functioning down in the garrison emergency operations center,” Wilson said, adding that they support the Garrison Assistance Team, a hotline for answering community member questions.