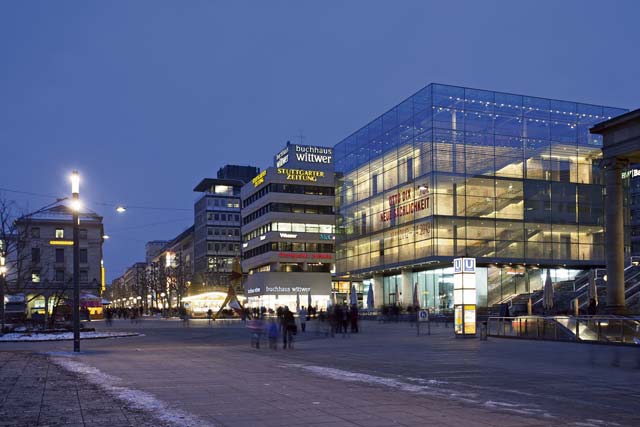 Photo by Thinkstockphotos.com
Pedestrian or “Fussgänger” zones can be found in many cities and towns throughout Germany and usually offer a variety of specialty stores and retail outlets. The larger the pedestrian zone, the larger the variety of shopping, and Stuttgart’s Königstrasse, pictured here, is one of the longest and most popular shopping streets in Germany.

Upon arrival to Europe one of the first things many like to do is get out and do some shopping. Shopping in Stuttgart and elsewhere in Germany can be a very positive experience, and shoppers can get most of the things that they’re used to back in the States, but there are some important differences to be aware of.

Clothing sizes in Germany are sometimes different to those in the U.S., and it helps to know some of the different clothing size systems. There are applications for smartphones that can help with size conversion, as well as online resources, though the size conversions can vary significantly from brand to brand and even within the same brand. While some clothing now comes with tags that list both U.S. and European sizes, it’s important to be aware of the differences, so not to end up buying pants that won’t even fit on one leg, or shirts that can double as sails. Most clothing stores offer changing rooms just like in the U.S., so the best practice is to always try clothing on before purchasing it.

One thing most Americans have to adjust to a little in Germany is the way in which Germans shop. Most shops are smaller, and in general, most towns have a central, downtown shopping district where most of the specialty stores are located. Larger department stores are gaining popularity in Germany, and at least one or two can be found in most sizeable German cities.  However the sprawling shopping malls with hundreds of shops, food court and a movie theater that dot towns across the U.S. are still somewhat rare in Germany, though they can be found in larger cities. Luckily for personnel here in Stuttgart, there are several large shopping centers throughout the Stuttgart area. One thing most German cities do have is a pedestrian zone, or Fussgänger zone, which offers a shopping experience that more than makes up for the lack of malls. Think of them as a large open-air, cobble-stoned, mile-long shopping malls. Specialty stores, restaurants and other services line these pedestrian streets, offering just about anything the average shopaholic might desire.

Grocery shopping in Germany in recent years has become a much more convenient experience. Franchise grocery stores that offer the full range of basic everyday grocery needs can be found throughout Germany in most cities and towns. Small villages may not have these facilities, but they are usually not far away in a neighboring village or town.

Grocery stores in Germany are laid out similar to U.S. stores, and though the product names and some of the packaging may be different, the basics are still the same. There is fresh produce, canned goods, frozen foods, and yes, frozen pizza and breakfast cereal, as well. 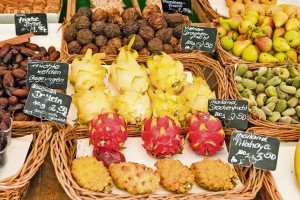 Photo by Thinkstockphotos.com
Local farmer’s and seasonal markets offer a wide variety of foods and other products. Some of the larger seasonal markets throughout the year, like Christmas markets, fall festivals, and spring fests also offer entertainment, carnival rides and much more.

Just like the clothing sizes, the measurements used in Germany differ from the U.S. Here in Germany, as with most of Europe, the metric system is used. The information on this page will help with some of the most common conversions.

Also, most German grocery stores do not provide bags for free. Most have plastic bags available for purchase for around 10 euro cents each, and a very common practice among Germans is to bring in their own bags.

Cash is still much more widely used in Germany than in the U.S. and many stores do not take credit cards or bank cards, and sometimes those that do require a minimum purchase. It is not unusual for a German to go to the store with several thousand Euros in cash to buy a full kitchen. While larger department stores, home furnishings stores and other larger shopping venues are starting to accept credit cards, the smaller stores, and especially grocery stores, often do not. A good rule of thumb if you are buying food, or shopping in a store where most of the purchases would be below €100, is to be prepared to pay with cash. For stores where the average purchase is much higher, ask if they take credit cards.

Return policies are another area in which shopping has changed in recent years in Germany, but they are still a little different than in the U.S. Most large department stores will have return policies, but these policies may be more restrictive than those that Americans are familiar with. It is important to ask about the store’s return policy before making large purchases, and always keep the receipts. German retailers that do accept returns almost never accept them without a receipt.