The best and the ‘wurst’ of German food

While the world-renowned bratwurst and beer is certainly a common staple of German cuisine, there’s a lot more variety in German food than that simple image conveys. It is true that certain universal elements of German food unite this nation of 16 proud states, each boasting their own unique cuisine. But, from roasts to schnitzel, to breads, cheeses and wine, the idea that German food is basic or simple is simply not accurate. 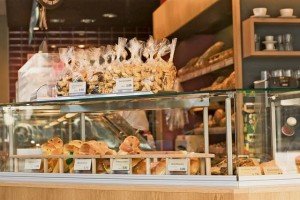 Photo by Thinkstockphotos.com
Local bakeries abound throughout, even small towns and villages in Germany, and they offer a wide variety of breads, from sweet pastries and cakes to the daily bread.

Hearty German cuisine usually focuses on a main meat dish. German men eat, on average 1,092 grams of meat per week with German women consuming on average about half that, according to the German Society for Nutrition. While vegetarian dishes and products are certainly available, the ‘wurst’ is still king!

To add to the solid heartiness of a good meat dish, potatoes are usually served in some form with every large meal. From Kartoffelpuree (mashed potatoes), to Kartoffelsalat (potato salad), Germans serve potatoes in every manner imaginable, and some rather less imaginable, but nonethe-less appetizing, like potato pancakes.

Next in priority in the German palate is bread. A wide variety of bread products from standard loaves of bread to pastries and more make up a large portion of the traditional German diet.

Big meal at lunch, bread in the evening

The traditional German manner of eating is to eat a big hearty warm meal (or warmes essen) in the mid-day and have some bread, cheese and sausages or lunch meats in the evening (often called Abendbrot or evening bread). In recent years this has changed somewhat and a wide variety of cuisine is available at restaurants throughout their normal operating hours. There are still offerings that range from a simple bread plate to a full, multi-course meal. 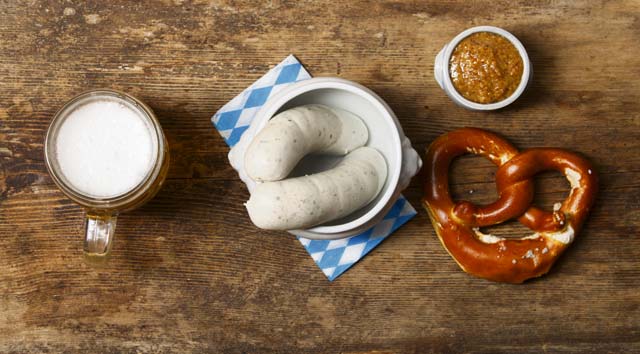 Photo by Thinkstockphotos.com
The traditional Bavarian Weisswurst (white sausage) and pretzel seen here is emblematic of German cuisine, but is only the starting point of what Germany has to offer.

Each region in Germany prides itself on certain foods or dishes, and there can be a wide variety in the food offered from region to region. Bavaria is known for the ubiquitous pretzel, sausage and beer, while regions along the Rhine river valley often take great pride in their fine wines and foods that go along with them, such as cheeses and breads. While there are common themes found throughout Germany such as Schnitzel, French fries, and various roasts or “Braten,” the variety of these dishes and others from region to region make traveling throughout Germany a culinary delight.

Also, as a centrally located Euro-pean nation, Germany has a wide variety of foods from other nations. Italian, Asian, French and eastern Euro-pean restaurants are common, and other varieties of inter-national fare can be found as well.

Germany has long been associated world-wide with beer, and with good reason. With well over a thousand breweries producing several thousands of brands of beer in Germany, there is plenty to choose from. German beer is typically a little stronger than most American domestic lagers, and ranges from around 5 percent to as high as 16 percent  alcohol by volume.

Wine also has been developed to a high art form in Germany and different regions produce a variety of wines, many of which can be enjoyed right at the vineyard. From red Dornfelder to sweet Spätlese (late-harvest) German wine can be found to please most any palate.

It is important to remember to enjoy alcohol responsibly in Germany. Drinking and driving laws are very strict here, and many of the alcoholic beverages offered can be much stronger than what many Americans are used to. There are very few laws limiting public consumption of alcohol, and alcohol is readily available, so self-control and responsible consumption are the key.