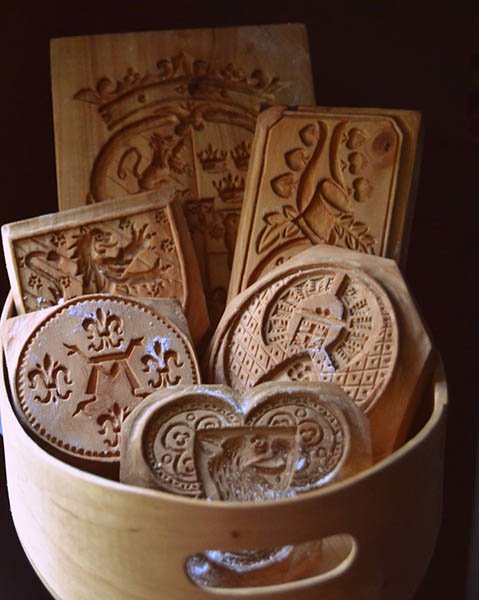 Maybe you’ve seen the ornately carved wooden molds at an antique shop, or perhaps you’ve noticed the intricately detailed white cookies in a booth at a German Christmas market.

If you’re anything like me, you may not have realized that the cookies, called Springerle, are created using those carved wooden molds.

Springerle cookies, often made during the holidays, are traditionally flavored with anise and feature detailed reliefs that include images of flowers, animals, religious scenes or finely dressed people.

Because of the anise flavoring, sometimes Springerle are also called “Anis-brödle,” which means anise cookie in the Swabian dialect. 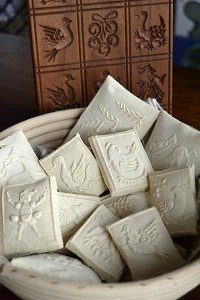 The cookies are hard and dry, somewhat like biscotti, which helps to retain the intricate patterns that are pressed into the cookie dough with the molds.
The molds come in many different shapes and sizes, and are typically made of wood.

For larger cookies the dough is pressed down into the molds one at a time, but rolling pins allow for many smaller cookies to be rolled out all at once.

Historians debate the exact origin of the word, but many believe “Springerle” means “little knight” or “little jumper” because many early mold designs featured riders on jumping horses.

Other historians suggest that the name originates from the baking process because of the way the carefully dried dry dough “springs up” or rises from the bottom, specifically to preserve the details on the top of the cookies.

Historians believe that the art of Springerle has a long history going back as far as the 14th century in Switzerland and Germany, reaching a peak of popularity in 17th and 18th century German-speaking regions, especially in Swabia and the Stuttgart area.

Stuttgart’s ties to Springerle are so strong that enthusiasts from around the world converge on the Old Castle each autumn to attend a Springerle convention where tools and techniques are shared.

The State Museum Württemberg has a large collection of Springerle molds that was most recently exhibited at the Museum of Everyday Culture in Waldenbuch, but the collection is not currently on display, according to the museum press office.

A quick Internet search using your favorite search engine will reveal a wealth of information about Springerle, including recipes and how-to videos.
Who knows, maybe making Springerle cookies can be part of your holiday traditions, too.