HomeCulture & Leisure29 days in February is a Leap Year

29 days in February is a Leap Year 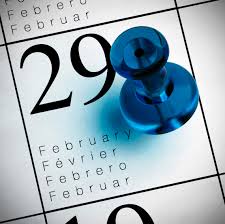 Leap years “happen” nearly every four years. The reason is astronomical and thus quite complicated. According to experts, it takes the Earth approximately 365 days, 5 hours, 48 minutes, and 45 seconds to circle once around the Sun.

The old Roman calendar did have 355 days with an extra 22-day month every two years, until Julius Caesar ordered his astronomer Sosigenes to devise a better system in 45 BCE. He came up with a 365-day year plus an extra day every four years . This Julian formula produced a leap year every four years, which, as it turned out, is too many!

The 16th century Gregorian Calendar, also known as the Western or Christian Calendar, is the most widely used calendar in the world today. When the above mentioned Julian Calendar had to be revised, it was replaced and put more in sync with astronomical events like the vernal equinox or the winter solstice, Pope Gregory XIII in 1582 decreed that 10 days simply be dropped when switching to the new Gregorian Calendar.

The new calendar settled on 365 days in a year, so if a “leap day” were not added nearly every four years, almost six hours would be “lost” annually. After about 100 years, the calendar would be off by 24 days. That problem has been whittled away by firm regulations in the centuries since then.

Leap Day as a concept has existed for more than 2,000 years, and is still associated with some age-old folklore and traditions. One quaint European custom that used to be observed is that women could propose marriage to their intended spouse themselves rather than waiting for a partner to get around to it!

People born Feb. 29 are referred to as “leaplings”, or “leapers”. In non-leap years, they can choose to celebrate their birthday either the day before, Feb. 28 or the day after, Mar. 1, while purists stick to Feb. 29 for the occasion and “miss out on” three years’ of birthdays. The chances of having a birthday on a leap day are extremely slim – the odds are about one in 1,461. Best wishes to those rare individuals on “their” day!