Understanding your legal status under SOFA, Status of Forces Agreement 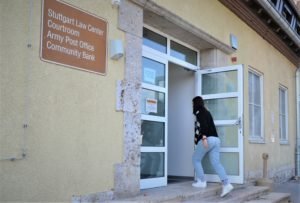 Community members with legal questions can make an appointment with the Stuttgart Law Center, located on Kelley Barracks. Photo by Rick Scavetta.

As a newly-arrived member to the community, it is important to understand your legal status as well as your protections in Germany. Service members, civilians and family members on military orders are governed by the NATO Status of Forces Agreement. Understanding how the SOFA affects you will make for a more enjoyable overseas tour, and perhaps prevent unpleasant, potentially costly mistakes.

The SOFA provides the basis for the legal status of military, U.S. civilian employees and dependents living in Germany on orders. Under an additional supplementary agreement, personnel in Germany also enjoy privileges not granted to others service members stationed elsewhere in Europe. These agreements affect status, entry and departure from the host nation, military training within host nation territory, jurisdiction, law enforcement, taxation, import and export laws, driving privileges, employment, mail, schooling, housing and much more.

German law applies to everyone

Although the SOFA determines your legal status, it is important to understand that German law applies to U.S. personnel both on and off base. U.S. installations are not U.S. soil. Additionally, while there are many similarities between German and U.S. law, there are also many stark differences. For example, spanking or paddling children as a means of punishment for disobedience is prohibited under German criminal law. German law considers it “physical punishment,” which makes it tantamount to child abuse. German civil law also differs quite a bit from what most may be familiar with in the U.S.

Too often, Americans sign German documents without properly reviewing them.

When considering, for example, a cellphone contract, don’t sign it until someone who reads German reviews the documents. In Germany, many service contracts automatically renew for one-year increments after the initial two-year expiration. You must give proper written notice to terminate the contract. If you fail to give proper written notice of termination before leaving, you could be on the hook for an extra year of cellphone service after leaving Germany.

Finally, keep a copy of termination notices and the company’s response. Army Community Service can help with proactively terminating such services. An alternative to signing a contract is to get a prepaid plan.

Personnel must check in at the Housing Services Office within two days of arrival in Stuttgart and keep them informed of their housing search status at all times.

Those residing off-post must be thorough and businesslike when establishing a contract and moving in. Landlord-tenant laws are very different in Germany and are, in many ways, pro-landlord. Keep all meetings with the landlord, at least the initial ones, strictly businesslike. One key difference between U.S. landlord-tenant law and Germany landlord-tenant law is that you can form an oral contract to rent property in Germany. This means you must watch what you say to a prospective landlord or realtor when discussing a property.

Once you find a place, note all preexisting damage on the inspection sheet provided by the Housing Office. Don’t rely on anyone else to note deficiencies. Anything you don’t annotate on your initial inspection will be attributed to you when the time arrives for your departure date. You’ll be personally responsible for repairs that aren’t notated on the initial inspection sheet. You can pay for the repairs out of your own pocket or from your security deposit. It is critical to remember that renting property is a business transaction.

Also, be careful when dealing with realtors. Realtors technically work for the potential renter seeking the property, but they are often very familiar with local landlords. Landlords often have more than one rental property and if their tenants are Americans, new tenants rotate through their properties every two to three years. This reality means realtors often take sides with the landlord during landlord-tenant disputes. Additionally, there may be hefty realtor fees associated with a property. In almost all cases, realtor fees are not reimbursable. Check with the housing office before contacting a realtor.

Marriage and divorce in Germany can be quite different than in the United States. Marriage or divorce documents are not easily transferred or mutually applied between German authorities and various states. Divorces whether overseas or back in the U.S., can be very complicated and could cost hundreds of thousands of dollars for alimony, child support, division of marital assets, and legal fees. Former spouses could seek a court order for money, call your commander to enforce a separation agreement or any obligation under military regulations to support families. Since the Law Center cannot represent personnel in divorces, you will have to seek services from a German attorney.

The garrison VAT office is located in Bldg. 2915, Panzer Kaserne.

The SOFA affords some very nice tax breaks to personnel under orders to be in Germany. Sharing these tax breaks with non-SOFA protected persons are strictly prohibited. Violations can cost a person their SOFA privileges, or worse, result in federal criminal convictions. Specifically, misuse of the fuel ration system or VAT exemption can create trouble very quickly. Also, anything acquired under the provisions of the SOFA at the Exchange, commissary or tax-exempt purchases made with a VAT form, are for personal use and are not allowed to be used in private business ventures. Don’t allow landlords to use VAT forms to repair or improve their property. Those interested in getting involved in a personal business while overseas under the SOFA are highly encouraged to consult the Installation Commercial Affairs Office.

Portable speed cameras on the can pop up anywhere on the roadside. Drivers will see a reddish flash and eventually receive a ticket in a letter addressed to the driver’s supervisor.

Speed cameras are much more common in Stuttgart and through-out Germany than they are in the U.S. Unfortunately, the Law Center lacks legal authority to assist drivers who received a speeding ticket or other traffic citation. The Office can, however, help translate the letter and explain the situation. So can Army Community Service. Prompt payment of fines is highly recommended.

The U.S. Army in Europe vehicle registry records German traffic violations and assigns traffic points. Drivers who get 12 or more traffic points in a one-year period face a mandatory license suspension under the Army in Europe Regulations. Those caught driving on a suspended license face a five-year revocation of driving privileges.

German culture encourages citizens to report inappropriate behavior, like parking in a no-parking area or littering. If someone tells you that you are parked in the wrong spot, you should move; small confrontations combined with a language barrier can quickly escalate, resulting in police involvement, hefty fines and court costs. In Germany, if you use a rude gesture or aggressive language toward someone else, you can be sued and forced to pay what is known as “Schmerzensgeld” or “pain money.”

For more information, read about SOFA and the Supplemental Agreement.