Summer hires contribute to community and their own future

Thirteen U.S. Army Garrison Stuttgart youths participated in the 2014 Summer Hire Program, working at various locations throughout the garrison from June 30 to Aug. 8.

The 18- to 23-year-old participants filled clerical and labor positions while they gathered six weeks of full-time work experience. 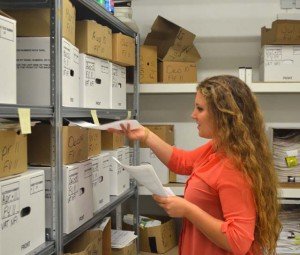 The timing of the program was just right for some organizations that benefited from summer hires at the peak of the permanent change of station season.

“The Summer Hire Program has done us justice,” said Wesley Blunt, a library technician at the Patch Library. “It’s a time where we have PCS season —people are coming and going —especially our employees. [Cassie] has been a tremendous help. It’s unbelievable how fast she’s adapted to the situation … of students being out of school, parents checking out books more than the usual. She’s been a great help.”

Mackenzie D’Andrea worked at the Value Added Tax Office where she assisted the staff with assembling and issuing VAT forms. According to D’Andrea, her position there was her first real job (which is the case for many summer hires), and the freedom and responsibility she enjoyed in the workplace was a new experience for her when compared to the controlled atmosphere of high school.

In school, D’Andrea was used to a 45-minute lunch break starting at 11 a.m. In many workplaces, it is common to get an hour anytime between 11 a.m. and 2 p.m. People in the office come and go as needed, moving from task to task, which is almost alien to some students after 12 years of following a strict regimen of bells.

“We’re so used to being told what
to do in school. Here, everyone auto-matically knows what to do, their responsibilities, their jobs,” D’Andrea said.

D’Andrea’s contribution to the office was definitely noticed and much appreciated, according to Ken Ackermann-Jones, the manager of the Tax Relief Office.

However, the work experience is not just about what the participants can contribute, but what experiences they can gain, he said.

“What we’re trying to do is make sure she has some experience in every aspect of our office.  She’s actually being involved with the costumers here. I think it’s a win-win for our office, the hires, the garrison and the people in the garrison,” Ackermann-Jones said.

D’Andrea said the biggest take-away for her was “probably the newfound knowledge of how the atmosphere of a workplace works, like what your responsibilities are, how to interact with costumers. I didn’t quite know stuff like that because I haven’t had an actual job, besides babysitting. I think it’s going to help with my future work.” 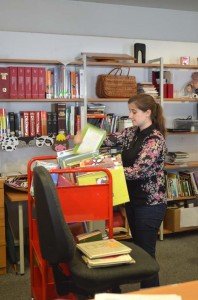 Cassie Schreiber, sorts books for reshelving at the Patch Library.

According to D’Andrea’s supervisor, there was no question about the value of the program and his organization’s desire to participate in the program next year.

“It’s a great program, it benefits our office, and I’m really hoping to be able to take advantage of the Summer Hire program again next year,” Ackerman Jones said.