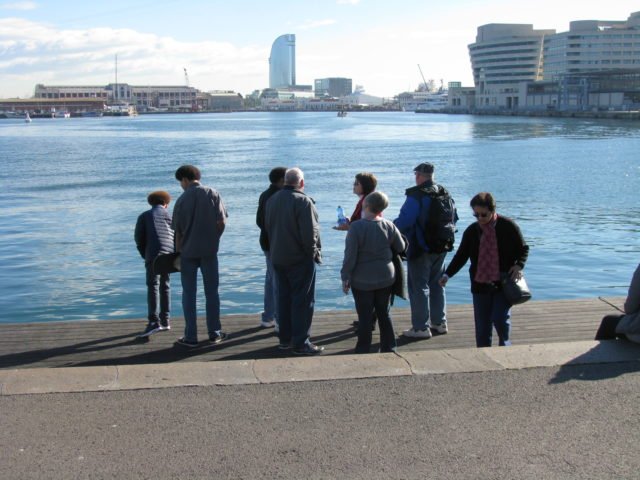 Gold Star family members and survivors gather at the point of the fleet landing, Jan. 17, 2017. This is where the Sailors and Marines boarded the LCM-6 Mike boat. A small boat in the center of the photo follows a course similar to the one the LCM-6 traveled on that fateful night. The freighter Urea would have come from the right, behind the pier. Photo by Joe Holder, USAG Stuttgart

On a chilly winter night, the future lives of two young Sailors, separated half a world away and then unknown to each other, became intertwined when tragedy struck in a Spanish port, Jan. 17, 1977. 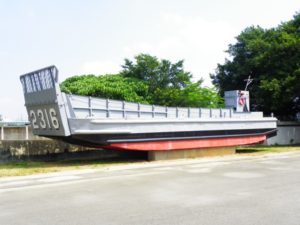 This Mike boat (LCM-6) is the same type of landing craft used as a liberty boat on Jan. 17, 1977. The boat, which has a very low profile in the water, came under increased safety regulations after the collision, affecting similar boats Navy-wide. Photo from Wikipedia

Forty years later, the shipmates journeyed from their civilian duty stations at U.S. Army Garrison Stuttgart’s Panzer Kaserne to remember the 49 Sailors and Marines who lost their lives when a freighter collided with an LCM-6 “Mike” boat (landing craft-medium) returning them from a liberty call.

Ships Serviceman 2nd class Dauphinee, 24, was on a long voyage. His ship, the USS Guam (LPH 9), a helicopter amphibious assault ship with a crew of 708 and a Marine compliment of 1,750, had visited Mombasa, Kenya, spent Christmas in Egypt at the Pyramids, transited the Suez Canal, participated in an exercise off coast of Greece and made a port call at Naples, Italy, before arriving at Barcelona. He, his bunkmate, 19-year-old Michael Sims and his petty officer went ashore to enjoy the hospitality of the Spanish port.

That evening, Dauphinee’s petty officer suffered a heart attack while ashore. Dauphinee escorted the sick man back to the fleet landing to board the next-to-last run of the Mike boat and brought him to the sickbay aboard the Guam. 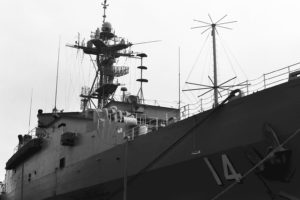 The USS Trenton (LPD-14), an Austin-class amphibious assault ship with a crew of 400 and the capacity to transport 2,000 Marines, is shown here in Barcelona Harbor following the accident. The ship was decommissioned by the U.S. Navy in 2007 and sold to the Indian Navy, where it continues in service today as the INS Jalashwa (L41). Photo by Fabio Pena

Around 2 a.m., the low-profile amphibious assault landing craft in service as a liberty boat was carrying 124 Sailors and Marines to their home ships, the  Guam and the USS Trenton (LPD-14), in its open cargo bay back. The ships were anchored more than a mile offshore, outside of the harbor. It was the last ride home of the night; to miss it would’ve been to miss roll-call the next morning.

The boat rounded a high commercial pier straight into the path of the  480 ton Spanish freighter Urlea. There was no time to react — the much larger freighter rammed the crowded Mike boat, striking it twice and causing it to capsize. The impact threw many of the passengers into the cold water of the harbor. Some of the Sailors and Marines were killed outright in the collision. Some were trapped in air pockets in the overturned ship. Others climbed atop the exposed hull and some were able to swim to shore 80 feet away.

“Shortly after the accident, at 2 a.m., the Guam sounded collision alarm,” Dauphinee said. “Normally, a collision alarm included an announcement of the frame number to minimize casualties.” 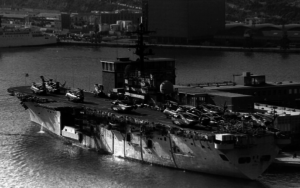 The USS Guam (LPH-9), an Iwo Jima-class amphibious assault ship, shown dockside in Barcelona Harbor following the accident, Jan. 30, 1977. The Guam was decommissoned in 1998 and served as a target for a SINKEX, Oct. 16, 2001. Photo by Fabio Pena

But there was no announcement and both ships mustered to account for all personnel.

“The word just got around quick that the Mike boat got hit,” Dauphinee explained. “In the Navy we call it muster, and we had to keep on mustering because they hadn’t recovered everybody.”

Rescue efforts began immediately. The Guam and Trenton sent rescue and assistance details. Spanish and American divers went into the 40-degree water to search for survivors.

Communication wasn’t good due to language differences, Holder said, but the divers from both countries saw there were survivors trapped below, holding on to a bar in an air pocket, and that they were running out of air.

“They were in the water for several hours, trapped underneath there, so the divers released air into the space,” Holder said.  “Whatever light there was came from the divers, otherwise, it was pitch black. 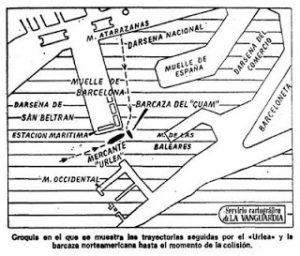 A sketch of the accident from the Barcelona newspaper, La Vangardia.

After rescuing the living, it soon became apparent that it had become a recovery operation, as so many personnel had been killed. Twenty-five personnel from the Guam and 24 from Trenton had perished, the breakdown being 25 Sailors and 24 Marines.

Dauphinee’s bunkmate, Sims, was one of the casualties.

“There was a strong likelihood that my supervisor and I would’ve been on the boat that got hit,” Dauphinee said.

The 40th anniversary memorial took place at the site of the accident. Guam shipmate Lamar Thomas and his wife, Lisa, coordinated the event with Holder from their home in Amarillo, Texas, and were among the attendees. Six of the divers, including the Spanish divers who helped with the rescue and recovery, as well as the crane operator who helped raise the LCM,and a number of Gold Star family members attended the memorial at the port’s Royal Nautical Club. 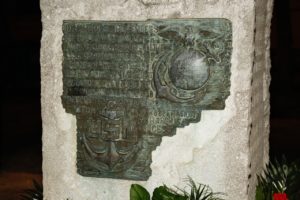 A memorial plaque at a monument at Barcelona Harbor is dedicated to the American service members killed in the accident. It was here the Marines placed the wreaths. Photo by Joe Holder, USAG Stuttgart.

“One shipmate walked into the room and said ‘Kerry, I remember you.’ It blew me away,” Dauphinee said. “Forty years, and this guy said ‘you haven’t changed a bit.’”

One shipmate still had the jacket he was wearing that night.

Lt. Col. David F. Lawrence, Marine attaché, Spain, came from his station in Madrid along with six Marines (two from the embassy and four from Quantico, Va., in country for a regular consulate security assessment). The Marines voluntarily brought their dress uniforms to form a color guard for the ceremony. Typically, they wouldn’t bring their dress uniforms for a security assessment, Holder said.

Two of Dauphinee’s shipmates from the Guam met at the ceremony for the first time; they hadn’t known each other during the time they served together on the ship.

“They became lifelong brothers. They had a shared experience,” Dauphinee said. “We were on the boat just an hour prior.

“One of the shipmates who attended passed away a week to the day after the ceremony,” Dauphinee said. “Another shipmate who went into the water helping with the rescue got hypothermia, suffered a heart attack and died 52 hours after the accident.” 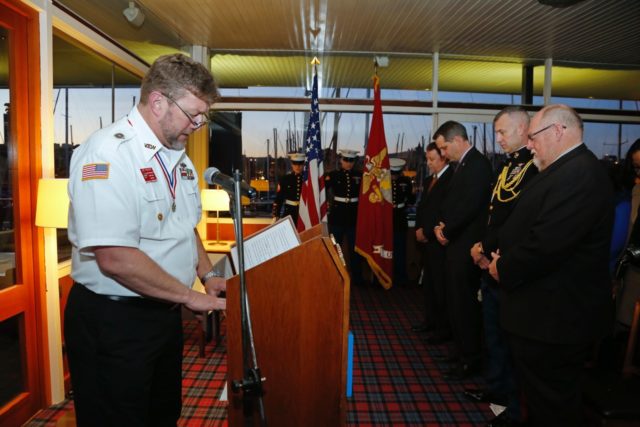 Joe Holder, USAG Stuttgart SLO and chaplain, VFW Post 10810, speaks during the ceremony at the Royal Nautical Club, Barcelona, Jan. 17, 2017. At right, Kerry Dauphinee, coordinator, USAG Stuttgart EFMP, who was on the Mike”boat just before the accident, bows his head in remembrance. Photo by the Navy League, Barcelona.

Dauphinee spoke at the event and Holder, representing the Veterans of Foreign Wars, European Chapter, Post 10810, acted as chaplain. Holder and past VFW Europe department chief of staff, master of ceremonies Tony Millett from Nurnberg, went down early to coordinate at the event.

“And if their loved one was there, they’d stand up in silence for recognition,” Dauphinee added.

Emotions ran high, and even the lieutenant colonel hesitated after a name was called, Holder said. 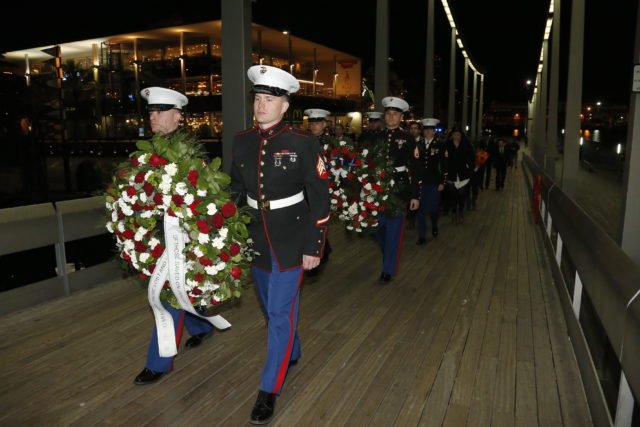 A volunteer honor guard of six Marines bearing wreaths lead a procession of survivors, rescuers, Gold Star family members, and Spanish and American dignitaries from the Royal Nautical Club to the memorial site. The wreath at the front is made of 49 red roses and 75 white flowers and was provided by a Gold Star family. Barcelona authorities secured the area around the memorial and closed a bridge over the harbor from the club so the remembrance attendees could pass unhindered. Photo by the Royal Nautical Club, Barcelona.

Holder noted it was the first time that many of the Gold Star family members witnessed force protection measures taken before the memorial.

“It gave them a better sense of what the men and women stationed overseas go through on a daily basis for operational security and force protection,” he said.

Although he was stationed on Okinawa at the time of the accident and didn’t meet Dauphinee until years later, Holder and his shipmates in the Pacific were operating the same class of Mike boats. Holder was scheduled to land Marines in amphibious training using an LCM-6.

“Specific safety rules and regulations, the number of personnel aboard … the Navy changed operations,” Holder said. “Those Sailors and Marines didn’t die and nothing changed from it — that’s not true. Things did change.”

Dauphinee still has powerful memories from the accident. That night taught him that he and his shipmates weren’t indestructible.

“One of the things I’ve thought of over the years was ‘what were the people on the pier doing?’ And what I found was the people there tried to help out with the rescue as much as possible,” he said. “It hasn’t been until recently that I’ve been able to come to terms.”

At the remembrance, one of the Spanish divers spoke through an interpreter.

“He said never before or since has anything ever impacted him as much as this one rescue. ‘I want to thank you for making me young again,’’” Dauphinee said.

A 45th year remembrance is already in the planning.

(Editor’s note: This article originally appeared in the February 9th newsstand edition of the Stuttgart Citizen. It is posted online for the first time in recognition of Memorial Day, May 29, 2017.)