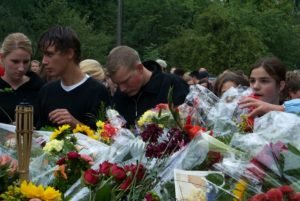 Terri Fitzgerald, a U.S. Army Garrison Stuttgart community member, was coaching cheerleaders at the high school on the afternoon of September 11, 2001, when a teacher came out and told her to get off post before it was locked down because there had been an attack.

Like many living in Stuttgart then, news reports of terrorist downing hijacked planes in Washington, New York and Pennsylvania came as a shock.

“I grabbed my girls. We drove home listening to the news on AFN radio but we still couldn’t believe it,” Fitzgerald said. “It wasn’t until I turned on the TV and saw the plane fly into the tower that I started crying. It’s just one of those things that you will never forget. Everyone knows where they were on September 11th.”

“I remember thinking ‘that’s weird, I don’t know this movie.’

JR McCutcheon was driving back to U.S. European Command headquarters from a conference in Frankfurt. While dropping off some documents at his office, McCutcheon noticed a TV clip of an airplane hitting a building.

“I remember thinking ‘that’s weird, I don’t know this movie’, before turning it off and heading for the door,” he said.

“He told me that I needed to find one of our generals in Ukraine and tell him to hunker down in his hotel,” said McCutcheon. “I spent the rest of the afternoon rounding up a bunch of generals and helping to coordinate a plane to get them safely back to the Pentagon.”

By the time McCutcheon left work on 9/11, he was hungry and tired. He took a stroll to clear his mind through a city that had shut down.

“It was so quiet,” he said. “I walked into a restaurant and there were only three people in there. They asked if I was OK and made me some food.”

McCutcheon ate, had a beer and went home to sleep. Arriving at work the next morning, Patch Barracks had transitioned into a warfighting command. 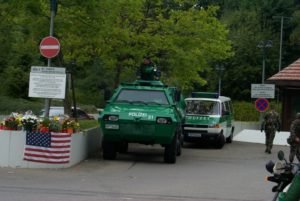 German and American security forces support each other outside of Patch Barracks after the attacks on 9/11. Courtesy photo EUCOM Historian.

“The gates were heavily guarded,” he remembered. “Every car was searched; people were pulled from their regular jobs to conduct perimeter patrols and we were issued chemical masks. Overnight everybody went tactical.”

For Fitzgerald, the heightened security at the gates was appreciated. As distinctly American license plates on their cars became potential targets she recalls having to check underneath for bombs and vary driving routes when going out.

“Suddenly we had to think about these things,” she said. “We stopped wearing anything that could stand out as American and we spoke softly in public. We were very nervous at first, but as the time went on, I actually felt safer in Germany and felt more afraid for my family in the States.”

On a day marred by pain and anguish, Americans living in Stuttgart found themselves surrounded by love and support. German students mourned outside the gates, holding homemade signs of solidarity and love. Mountains of flowers and notes stood out in stark contrast on a backdrop of armored vehicles and troop carriers.

“The support was overwhelming. They grieved with us, they stood with us, and they protected us. It made me proud to be an American in ways I had never felt before.”

German military and police patrolled out front, sending the message to anyone wishing to inflict harm on a U.S. installation, that they would have to get through them first. “Almost instantly they rolled up,” said McCutcheon of German supporters. “And they turned out in force to show us that they were here, and that they would stand with us to protect our nation.” 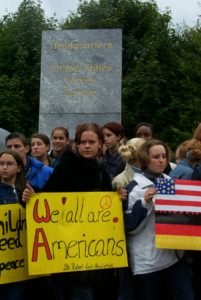 German community mem-bers show their support in the aftermath of the 9/11 attacks in September 2001. Courtesy photo EUCOM Historian.

The following weeks and months would be a learning process for the Army and the military community in Stuttgart as they found a new battle rhythm in the war on terror.

“The support was overwhelming,” said Fitzgerald. “Yes, it happened on our soil and it united us to stand up strong and show what we were made of, but we were never standing alone. They grieved with us, they stood with us, and they protected us. It made me proud to be an American in ways I had never felt before.”

McCutcheon watched his year-long reserve gig get extended three times, ultimately calling Stuttgart home until 2004. He returned to EUCOM in 2017.

Americans felt anger and sorrow worldwide on Sept. 11, 2001 and each anniversary since. U.S. installations usually remember with a ceremony or a wreath in honor of all who lost their lives on that tragic day. With so much unrest and uncertainty demanding the attention of the world this year, and a pandemic making gatherings difficult, McCutcheon said he will find time in his day to remember those lost in the attacks and the aftermath.

“A lot of my friends aren’t here because of what happened that day, and I remember that and take a deep breath and thank God that I’m still here,” he said. “It also reminds me that there’s no place for people who are intolerant of those who aren’t like they are. That kind of thinking caused 9/11 and we cannot allow it or use the attacks as an excuse to be intolerant of people who are not like us.”

Fitzgerald agrees and adds that now more than ever, we need to remember not just the lives lost but the solidarity America felt after September 11, 2001.

“We stood up together and we showed our enemies that we will not bend. We will not break. And we will seek justice for what is right,” she said. “It shouldn’t have to take something as horrific as 9/11 to create that unity. I wish that above everything that is going on this year, we could remember how it felt to be an American on that day. And stand up together again.”