HomeFeaturesPups of Stuttgart band together to save cat

Pups of Stuttgart band together to save cat

Kimberly Jackson, was on a work trip to D.C. when she got a phone call from her husband that every pet parent dreads – Patton is sick.

“I just dropped everything and rushed to the airport,” said Jackson. “She’s not just my cat, she’s my best friend.” 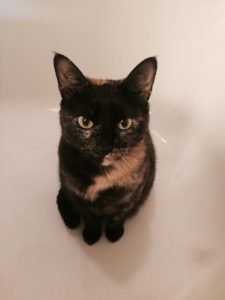 Patton came into Jackson’s life in 2012 after much research and hunting for the perfect furry friend. She went to a PETCO adopt-a-thon to meet a “little kitty who loves to crawl under covers.” Jackson believes though that it was Patton who chose her in the end.

“I went to her cage and there was this lump in a green bag,” said Ulrich. “Everyone working there said she was really sweet, but she wouldn’t come out of that bag for anyone at these events. So, I stuck my hand out and to everyone’s amazement, she came out and nuzzled it. They said not once in three months had she done that for anyone else.”

Since choosing Jackson, Patton has been by her side through major milestones from Jackson’s marriage to the arrival of her cat-sister, Eisenmeower. In 2018, when Jackson’s husband received orders to Stuttgart, she never questioned if bringing her pets was worth it – they were her family.

“It was just me and Patton for a while when I was younger, there isn’t anything I wouldn’t do for her,” she said.

Now three years later as her husband Cris Ulrich sat with a very sick Patton in a veterinary emergency room, an emotional Jackson rushed to the airport to catch a flight back to Stuttgart – there still wasn’t anything she wouldn’t do. The vet determined Patton was having an allergic reaction to hyperthyroidism medicine and gave her something for the nausea. But instead of helping, the new medication triggered an extremely rare reaction in the sick cat, causing her face and body to swell and her blood cells to begin leaking fluid. Before long, she suffered a stroke from internal bleeding in her stomach and brain. Patton was going downhill fast.

Jackson and Ulrich frantically read everything they could online and reached out to Patton’s old vet in Alexandria for a second opinion. At one point, Jackson tried to set up a video consultation with specialists to give her best friend a fighting chance.

“Euthanasia was never an option for me,” said Jackson. “Unless she was in extreme pain, I knew that I would do anything to help her survive.”

Five days after Patton was admitted, Jackson and Ulrich got the call they had been hoping to avoid. “They wanted us to come in and say goodbye,” she said.

As the veterinary staff handed a weak, bundled up Patton to her mom, Jackson worried for the first time that she might lose her baby. Through the fear, something the vet said triggered a memory from all of Jackson’s research.

“They said she had lost too much blood, but another vet had mentioned a plasma transfusion at one point so I asked if we could try a blood transfusion in a last effort,” said Jackson.

A hesitant vet explained that because cat blood has a short shelf-life, supplies are scarce. They warned it would be extremely difficult to find a donor cat that was a match. So, Jackson turned to a group she knew would understand her desperation: Pups of Stuttgart.

“This is a group of people who love their animals,” said Jackson of the Facebook group dedicated to helping Stuttgart military pet owners, navigate life in Germany. “I didn’t know what to expect, but if anyone was going to be willing to help me, they would be here.”

“It was unbelievable the number of people who just asked ‘what do you need? How can I help?’,” she said.

As Jackson began the process of vetting potential donors, her friend and cat sitter, Maggie Dieter, hopped in a cab with her cat, Bell, and headed to the clinic to help.

“We didn’t know anything about this procedure but we knew immediately that we wanted to help,” said Dieter. “Patton is just the sweetest and if we could give her a chance, we were going to try.” 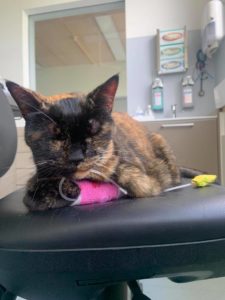 But as Dieter and Bell rode to the clinic, a new obstacle arose, they were out of the test strips needed to confirm a donor match.

“It just seemed like at every turn we hit a wall,” said Jackson.

Jackson and Ulrich frantically called every emergency vet clinic in a two-hour radius. It was Sunday and many were closed. Thankfully a vet in Ludwigsburg picked up and said they had the necessary strips. Patton’s time was short, they had burned precious hours finding a clinic, and this was their last shot. More hours passed, then vet announced the results. Bell was a match. The life-saving procedure could began.

By the next day, Patton seemed to be improving, but by Tuesday, the vet recommended another transfusion. Jackson once again turned to the community and received overwhelming support. “One woman sent me a message and said I’ve got two cats; my bags are packed, my toddlers in the car, I can be there in 30 minutes,” said Jackson. “There was just something about the way she was so calm, direct and kind when I was in such a worried, anxious place.”

Nikohl Wulfsberg had just joined the Facebook group and Jackson’s plea for help was the first post she saw. She believed the moment was meant to be.

“We have moved three cats from New Mexico to South Korea and then to here,” she said. “It is a huge pain. It’s not something you do because it’s easy or fun-you do it because they are your furry family members and it was very apparent from the way she talked about Patton that she felt the same.”

Wulfsberg brought two of her cats to help. Tux was the “ideal” donor according to the veterinary staff, who were able to draw enough blood to reserve some for a third transfusion if needed. It was, two days later, Patton received her third and final transfusion.

“After her last transfusion on Thursday, they said she had to start producing her own new cells by the weekend or we were out of options,” said Jackson.

As time ticked-down, Jackson and Ulrich visited Patton daily and met many of the clinic staff who had fallen in love with their sick kitty.

“She had an IV in her neck and was undergoing so much prodding and poking but she would still purr,” said Jackson. “I gave them her green bag, the one I adopted her in, and as soon as she could, she climbed inside-they thought that was so cute.”

After two days of waiting, Patton’s blood work came back on Sunday, May 23, with amazing results. And now twelve days after her May 11 post on Pups of Stuttgart, Jackson posted an update with the exciting news. Patton was going to make a full recovery. By then, the post had nearly 75 comments from concerned community members.

“To say that this community saved her life is not an overstatement,” said Jackson. “If we were not able to get a blood transfusion for her, we would have lost her. No question.”

After some days in the animal ICU, Patton returned home where Jackson reports she is improving and showing more signs of her old personality every day. Through the harrowing experience, the cat mom said she has made lifelong friends.

“I’m going to be friends with [Maggie and Nikohl] for life,” said Jackson. “They both put their cats at risk, even though it was slight, to save mine. And you can’t say thank you enough for something like that.”

As for Patton, Jackson believes she’ll be bringing people together for many years to come.