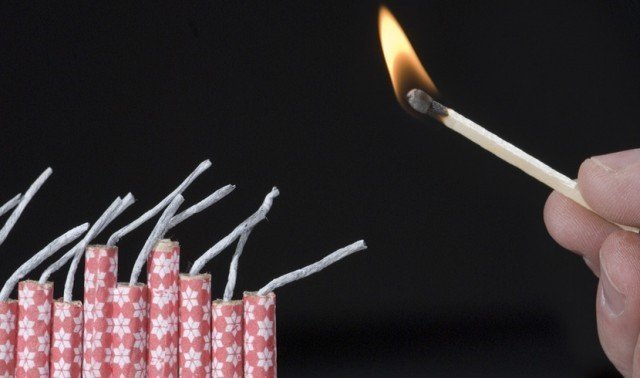 Enjoying New Year’s Eve with fireworks is easy if you stick to some simple rules and keep a few things in mind: According to German law, shops are only allowed to sell fireworks, rockets, wheels or bangers in the time period from Dec. 29 to 31. Except for children’s firecrackers, which are labelled “Klasse I” and may be used all through the year, regular fireworks, “Klasse II” fireworks, can only be purchased by adults.

Legally, fireworks may only be fired from midnight Dec. 31 until Jan. 1. If you don’t want to ruin your neighborhood relationships, don’t start shooting off fireworks in the wee hours of the morning. Fire them off in the evening on Dec. 31.

In order to protect their medieval town centers, some cities have banned fireworks completely. Always check with your local authorities first before setting off fireworks.

Note that bringing firecrackers into Germany as well as possessing or using them as a private person is considered a criminal offense. There are illegal vendors who sell unsafe fireworks from Eastern countries. These fireworks have highly explosive contents that can cause severe injury or death. To be on the safe side, always check the item displays a sign saying “Klasse II” and “BAM” with a number following it.

Also, it is forbidden to carry a gas or starter pistol, “as they could be mistaken for real guns. That’s the reason behind it,“ Astrid Christmann of the Kaiserslautern City Law and Order department said. “However, it’s allowed to use them in your own garden.”

As for the proper handling of fireworks, the expert calls for common sense.

“Never light them in your hand and never throw them at people, houses or windows,” Christmann said. “Also, do not put them into letter boxes or trash cans. These are criminal offenses and, apart from that, they surely aren’t fun for those hit by them!”

Every year, numerous people get hurt and lose fingers, hands, hearing or eyesight, or even die from accidents associated with fireworks. For safety purposes, only allow children 12 years old and up to set off children’s firecrackers. Class II fireworks should only be used by adults.

“People have the weirdest ideas. Once in Kaiserlautern, the heavy metal cover of a manhole flew up because somebody had the stupid idea to put a cracker inside,” Christmann said. “That’s really a shame, because New Year’s should be a great time for everybody and you don’t want to start it in hospital or prison.”

There is more to consider: Never light fireworks indoors or near dry grass.

“In fact, the law requires you even to stay 100 meters away from forests all year through,” Christmann said.

Also, always have a bucket of water or a fire extinguisher nearby. Don’t wear loose clothing while using fireworks and stand several feet away from lit fireworks.

If a device does not go off, never stand over it to investigate. Put it out carefully with water and dispose of it.

Fireworks are incredibly popular in Germany on New Year’s Eve.

However, it’s important to keep in mind Army in Europe Regulation 600-1, which states private fireworks are not permitted on any Army installation in Europe.

Be careful and have a safe start to the New Year!