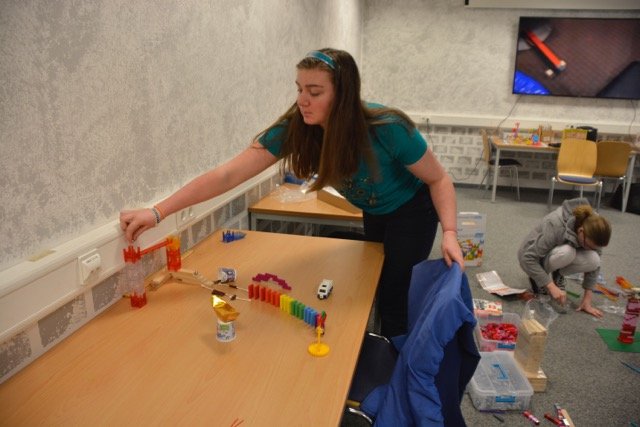 A group of intrepid young inventors used dominoes, duct tape and determination to emulate the contraptions of Rube Goldberg, an American cartoonist who drew complicated devices that performed simple tasks in the Patch Library, March 10. After Goldberg’s cartoons and short films became popular during the early 20th Century, his name was coined around 1928 for devices created, by design or accident, that go through a number of unnecessary twists and turns. “Rube Goldberg” was added to the Random House dictionary in 1966.

“This is our Rube Goldberg Workshop. We let them experiment with all kinds of materials that we’ve got her to build a machine that can ring a bell. We give them something simple; in the past, it’s been to ring a bell, pop a balloon, shred some paper,” said Laura Swangin, library technician. 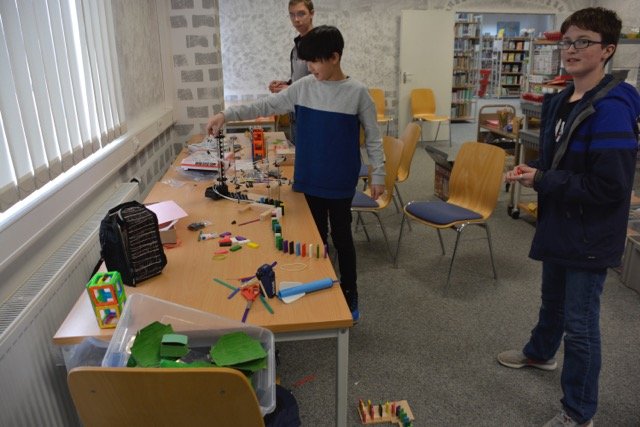 Amari Rondeau initiates another test run of a machine built with his friend and fellow Patch Middle School student, James Stele, by dropping a marble onto a winding rail to start the dominoes on the table and the floor, ultimately causing a bell to ring. Photo by John Reese, USAG Stuttgart Public Affairs

Teen and preteen student-age community members engineered contorted machines using a variety of toys, cardboard tubes and tape with the ultimate goal of ringing a small bell. For inspiration, a childrens’ library book about Rube Goldbergs and the classic board game “Mouse Trap,” itself an example of a Rube Goldberg, were on a table below an intriguing film of of assorted Rube Goldberg devices. The students worked alone or in teams, engrossed in perfecting their machines. None of the inventions used electricity – most, if not all, used the kinetic energy of marbles and gravity to power them.

“At places like Perdue University, they actually get whole teams of engineering students to come together and build a huge contraption that does a simple thing,” Swangin said. “We’re not quite that tech-savvy, so we’ve got some simpler materials to work with.”

Amari Rondeau and James Stele, both 6th graders at Patch Middle School, performed test after test as they reset and expanded their machine, trying to make the longest and most complicated of the devices in the room ring the bell.

Amari released a test marble, but the machine still wasn’t quite right. A high school student watching the test noted Alexander Graham Bell did 999 tests before he figured out how to make the incandescant light bulb work. Amari and James went back to the drawing board, setting up another test. 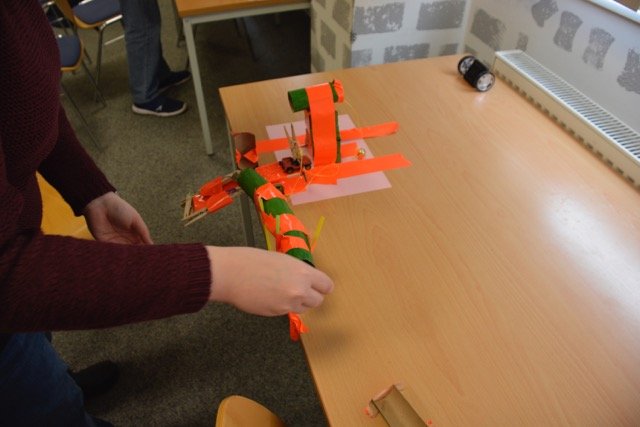 “We should’ve got more dominoes. That seems to be the hit,” Swagin said, adding that some of the supplies for the workshop came from a grant provided to libraries across the U.S. “We’ve got a lot of stuff that deals with building; Space Rails, Connections Kits, Legos; things like that. We also got items that deal with programming and video games, and we got some equipment for photography. The focus (of the workshop) is like it is on STEM (Science, Technology, Engineering and Math).”