According to the Mayo Clinic, tobacco dependence is defined as an addiction to tobacco products caused by the drug nicotine.

“Dependence” means you can’t stop using the substance, even though it’s causing you harm. Nicotine produces physical and mood-altering effects in your brain that feel good. At the same time, stopping tobacco use causes withdrawal symptoms, including irritability and anxiety.

I know, I used to smoke.

Each year, my anti-smoking campaign grew and, by 2002, I had developed a year-round program that included placement of “smoke signal” signs in each of the depot smoke shacks. The signs included thought-provoking pictures and messages that were circulated among the shacks so smokers would see a new message every few weeks. The signs made some smokers mad. Many were torn down or covered with vulgar graffiti.

Honestly, I’m not sure how many people chose to quit because of those signs.

It took me two more years to take my own advice.

In 2002, I was enjoying my usual morning cigarette with my coffee; another on my drive home; a few more before the end of the day; and even more on weekends.

I admit that thoughts of quitting had previously crossed my mind and I had made a few half-hearted attempts, but it took my pregnancy with my first child to finally commit to a change.

It’s been 13 years and counting. I look back and am so thankful that I got that monkey off my back. So did my husband; we kicked the habit together.

I read an article the other day about scientists who spent years measuring the quality of life for older smokers. Their research includes everyday things like physical activity, pain, energy level and mental health.

All were negatively impacted by smoking.

In fact, smokers can expect the last ten years of their lives to be more physically and medically challenging and expensive, compared to non-smokers.

The great news is that the researchers have also documented that these effects begin to improve almost immediately after a person quits.

There are many reasons to quit. I found mine. You can find yours.

(Editor’s note: Employee assistance coordinator, Juandalynn Givhan-Simmons, shares her journey to a healthier life by quitting tobacco use. She’s just one of the many Americans whose lives have been changed by tobacco cessation programs.) 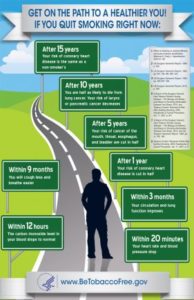 If you quit smoking right now…
Within 20 minutes: Your heart rate and blood pressure drop.
Within 12 hours: The carbon monoxide level in your blood drops to normal.
Within 3 months: Your circulation and lung function improves.
Within 9 months: You will cough less and breathe easier.
After 1 year: Your risk of coronary heart disease is cut in half.
After 5 years: Your risk of cancer of the mouth, throat, esophagus, and bladder are cut in half. Your risk of cervical cancer and stroke return to normal after 5 years.
After 10 years: You are half as likely to die from lung cancer. Your risk of larynx or pancreatic cancer decreases.
After 15 years: Your risk of coronary heart disease is the same as a non-smoker’s

Join the free smoking cessation program which includes online and in-person consultations at the Stuttgart Health Clinic on Patch Barracks. Read more about it here.

2017-03-27
Previous Post: Honoring women of the past, present and future
Next Post: Help is available for quitting tobacco