What is a Fine Dust Alert in Stuttgart? 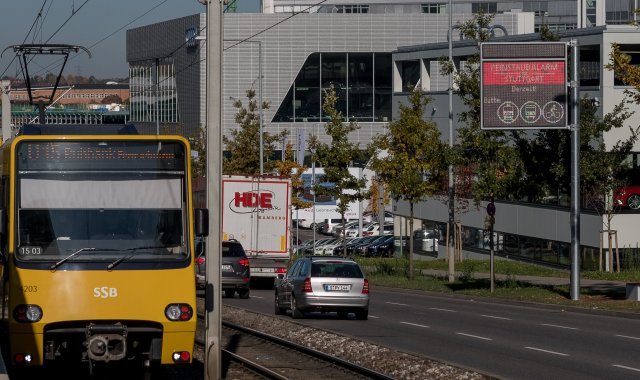 The photo depicts a scoreboard announcing fine dust alert in Stuttgart at Heilbronner Strasse. According to the city of Stuttgart, the fine dust season is now set between October and April 2017.
Photo courtesy of city of Stuttgart/LeifPiechowski.

The city of Stuttgart issues fine dust alerts occasionally through the year in Stuttgart as a voluntary measure to prevent added smog and air pollution in the area.

The first alerts can be issued at anytime, however, according to the city of Stuttgart, the fine dust season is typically between October and April.  Also, on Dec. 24 (Christmas Eve) and Jan. 6 (Epiphany), the city won’t issue fine dust alerts.

Fine dust alerts are issued by the city when the “Deutscher Wetterdienst,” or German Weather Service, predicts lowered movement of air on two successive days. According to the German weather service, it typically takes a week for levels to be reduced.

Currently, city authorities request commuters to travel by public transportation or car-sharing on a voluntary basis, but officials say non-compliance may be subject to fines in the future if air pollution is not reduced.

In the event of a fine dust alert, special fine dust tickets (Feinstaubtickets) for “Verkehrs-und Tarifbund Stuttgart” (VVS) public transportation will be offered, meaning that single fare tickets (valid for one person) are half priced. Commuters can purchase a children’s ticket through the VVS-App, at the various ticket machines or with the bus driver. Day tickets, short distance tickets and group tickets are exempt from the offer.

During the fine dust alerts, drivers can use the electric car sharing “Car2go” in the greater Stuttgart area for €0.19 per minute instead of €0.29.

All S-Bahn and U-Bahn trains will run on an increased schedule during the morning and evening rush hours.

During the fine dust alert, residents are also encouraged not to use wood-burning stoves in their homes.

Stuttgart’s location in the “Kessel,” or valley, leads to higher concentrations of air pollutants. Stuttgart is considered one of the most polluted cities in Germany, and levels of the harmful fine dust have long been well above the 50 micrograms per cubic liter imposed as a limit by the European Union.

Fine dust is harmful to health as air pollution is a major factor in causing respiratory diseases.