Outside the Original’s dining facility on Panzer Kaserne, snowflakes drift silently to the ground during an early January morning. Soldiers stomp the snow off their combat boots before entering through the wooden doors and into a warm, welcoming atmosphere, where the sights, smells and tastes, are enough to make anyone enjoy waking up before the sun.

Amid the smells of eggs, bacon, and other breakfast selections that mingle together to create a tantalizing aroma, a man in a white chef’s coat works at a stainless-steel prep station, chopping a medley of peppers for today’s lunch special: Soul Food. But Haze Hardy Jr. Says soul food isn’t a real thing. It’s just some term invented to market meals that are also associated with southern black American culture.

“Most soul food was more accurately cheap food for poor folk,” he says as he dumps the colorful peppers into a large pot. “The food that we call soul food; ham-hocks and pigs feet and red beans and rice and collard greens, most of them were ate by the poor people, black and white. Because it was cheap.” 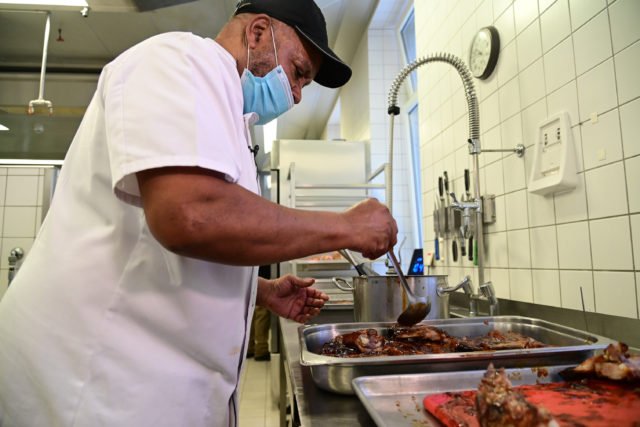 Despite Hardy’s thoughts on the title soul food, he pours his soul into every dish he makes for the Stuttgart military community, and into the young soldiers he mentors inside the kitchen.

“He’s a fixture in this community and has been for many years,” said Sgt. 1st Class Dirk Yamaguchi, the NCO in Charge at the Originals Café.

Hardy came to Stuttgart in 1969 as a medic and worked on Panzer Kaserne, but he said the medical field was never his fit. He found his true passion in cooking, several years before when his mom got him a job at a restaurant she worked in.

“One of the cooks just up and quit one day and they didn’t know what to do,” he said. “Mama just told them ‘My son can do it, I’ll teach him. I was working there as a janitor at the time but cooking paid more money so I said why not?”

Hardy began to find success as he grew into his role as a chef and fell in love with cooking. Not long after his 18th birthday, he splurged on a 1968 Canary-yellow, Road-Runner. He loved to settle into it’s white leather seats and drive around. Hardy was just beginning to settle into his new career when Uncle Sam came calling.

“03-03-50. That’s my birthday and with those three numbers, I won the lottery — only lottery I ever won too,” he jokes as he counts out 6 bay leaves for the jambalaya he’s making.

Despite being drafted, Hardy enjoyed his time in the Army and would have made a career out of it, if the pay had been better.

“You couldn’t raise a family on what they paid back then,” he said. “I remember getting my first paycheck and counting out $90. I said to the payroll officer, ‘Ok, see you next week.’ and he said ‘for what? That’s your pay for the month.’”

A recipe for Shrimp Jambalaya

Hardy recalls counting each bill again and walking away in shock. It wasn’t too long after that he returned his new car. He knew he could not afford the monthly payments on his new income.

“Now-a-days they really take care of soldiers and pay them much better but back then you couldn’t raise a family on $90 a month and , since that was what I wanted eventually, I knew I had to do something else,” said Hardy.

After his enlistment was up, he separated with an honorable discharge and immediately began looking for a job back in the kitchen. Hardy said back then it was difficult to get hired when you stayed on a tourist visa but he got lucky when a position at the golf course opened up.

Hardy spent nearly three decades working for MWR at the golf course and Robinson barracks, before making the move to the officer’s club on Kelley and, ultimately, landing at the Patch Dining Facility. When they closed, he brought his skillset to the 10th Special Forces Unit’s Originals Dining Facility on Panzer Kaserne.

Yamaguchi said Hardy brings an amazing attitude and work ethic to the team and has bridged the gap between the generations.

“He’s relatable to the young guys and the older ones and the Soldiers and Civilians alike all love and respect him,” Yamaguchi added.

Staff Sgt. Malcolm Andrews said Hardy is the epitome of a Chef and inspires him to keep learning.

“His confidence will rub off on you when you hear him say ‘there’s not a thing in here that I can’t cook,” said Andrews. “When he comes in the building and says ‘Alright ya’ll, lets get hot,’ you know that no matter how difficult your day seems, Mr. Hardy’s going to help you get through it.”

After more than 50 years of cooking for the community, Hardy’s duties include a lot more administrative tasks than they used to, but he still finds time to dirty a dish or two in the kitchen.

“I love cooking, and I like to see people enjoy their food,” he said. “When people say ‘man, that was good!’ or someone goes out of their way to let the kitchen know they enjoyed their meal, that just makes my day.”

Hardy stirred in the final ingredients to his jambalaya before pulling a rack of ribs from the industrial oven behind him. Together, the smells create a delicious aroma and it isn’t hard to imagine that the 71-year-old Chef’s day will be made with a compliment or two before today’s lunch is over.