Writing is only one example skill that can turn into a successful mobile career within the military lifestyle.

Wendy Payne is a 22 year military and retired civilian service spouse who currently writes for MilitaryinGermany.com, based in Stuttgart.  She has moved 14 times with the military all over the world and is grateful for the experience, “I have been an FRG [Family Readiness Group] leader, AFTB [Army Family Team Building] Master Trainer and Leader. I love the military community.”

Payne had prior experience writing in the form of grants for non-profits, and in the marketing and publishing fields for businesses including her own. She had also worked as a marketing assistant for a large association in Washington D.C.

After moving to Germany, with the help and support of her husband, Payne followed her natural entrepreneurial spirit to put her degree in travel and tourism to use.

“He encouraged me to become a freelance travel writer and help people connect and discover Germany and the Baden-Württemberg area. I like to share my experiences, finds and interesting discoveries,” said Payne.

Payne is in the process of developing an interactive travel website that will help her to write a book for military spouses who move a lot and want to connect and explore around their duty station.

Payne’s advice for for military spouses is to hang in there! This life is crazy, unpredictable but full of blessings. Look for the positive and connect! “I cannot emphasize this enough. Get out of the house, join the spouse’s club, your FRG, go to the playground and chat with other mom’s. Get out into the community, find out what fests are going on and engage. You won’t regret it!”

Monica Lee Kennedy is a Stuttgart based, recently published writer who enjoys the flexibility of her job and the fact that her, “schedule only shifts when nap-time does.”

With a husband in the military and two small children, Kennedy wanted to do something for herself and her husband supported her all the way.

“We both make it a priority to support the others goals and I think this has been very freeing for us,” said Kennedy.

The first book of her trilogy entitled The Land Whisper, now on Amazon.com, is a fictional fantasy series, suitable for teens and adults alike, and deals with the concept of the land being alive. Her next two books, Eyes in the Water and The Forbidding Blue are already written and will be out later this year.

“I grew up in Colorado Springs, and although the area is heavily military, I hardly knew anything about the people or lifestyle or sacrifice that came with the job. It has not been easy, but neither has it been impossible. We’ve never stayed in one place for longer than two years, and have had two little girls in the midst of schools and deployments. We have learned strength in remarkable ways,” said Kennedy.

As a child, Kennedy wanted to be an author. She wrote poetry growing up and dabbled with fiction, but larger stories fizzled out before anything developed. Writing became more serious as Kennedy found the need to have something she could pursue for herself.

At the time, the family could only afford one car and lived a significant distance from post, meaning it was not possible to share. “I felt like I had a choice to either embrace the opportunity of silence in his long hours away, or in truth, just be lonely. So I wrote. And the more I wrote, the more I experienced the joy and beauty of having something all my own,” said Kennedy.

“I feel such compassion for military spouses who want careers. It is close to impossible for both people to pursue it simultaneously with so much uprooting. I’m very blessed in this regard. I can bring my writing wherever we move,” she continued.

Kennedy’s words of advice to military spouses: I had an artist friend tell me once, “If I never give up, it will happen eventually. Sure, I will face rejection. But eventually it will work out if I keep putting myself out there.” This sentiment has been incredibly encouraging, and has kept me focused on creating and ever seeking to improve. 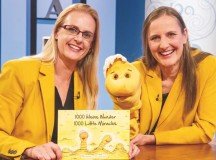 “It is the only bilingual book in rhyme form in the world. It rhymes in English and in German on the same page.” said Spillman. “The sandworm is the simple reminder to believe in yourself no matter which whale you are facing in your life.”

The Spanish/German and Spanish/English version of the book is slated to be published later this year.

Spillman never thought about writing. She struggled with dyslexia when she was younger saying, “it took me a while to realize that this was a gift and that I was not dumb. It made me approach things very differently and more creatively, like rhyming or labeling words with color.” She went on to achieve a trilingual Masters in Business Administration, as well as in management and leadership.

Before getting married, she began her career as part of the Euro Project team of Deutsche Bank and head of internal Euro communication in the headquarters in Frankfurt. “I was responsible for the entire internal marketing and communication process for the transition to the Euro, making sure to create a uniform reliability image for the bank, but having it inter-culturally adapted.”

Fast forward to marrying into the military lifestyle. Spillman has seen many bases, commands, aircraft, and lots of wonderful Airmen, but writing and forming a publishing company was never a part of her plan.

“We had just PCSed to Stuttgart in 2012 and I had planned, after all these years of volunteering, to go back into corporate Germany, until our daughter said one night: “Mom, please turn off the light and tell me a story.” I realized this was the moment to speak into her life, telling her how unique she was and that she had a fingerprint that was only hers. Night after night, the stories kept coming and I saw how her self-confidence rose when telling her that she could not compare herself to anyone in this world because no one else had her talents and purpose. I shared these stories with my running moms, they started to tear up and insisted I would write them down, ” explained Spillman.

The road was not easy, after selling the first edition at the end of 2013 everywhere possible, from shoe stores, the doctor’s office, and in children clothing stores. The persistence paid off and in December 2015, Spillman held a book signing at AAFES and hopes to return as a vendor in the near future in addition to engagements reading to children at Stuttgart schools. 1000 kleine Wunder – 1000 Little Miracles is currently for sale off-post at Weltbild Sindelfingen Breuninger Land.

Spillman’s favorite part of writing is, inspiring and encouraging students to believe in themselves, their dreams and never give up with key takeaways for everyone from youth to spouses to service members;

“What do you do when you encounter a situation as big as a whale? Everyone has a whale in their lives…either health, school, marriage or the military, etc. Are you going to tackle it with intelligence or with pure strength? Most of the time you realize that you have to see with your heart and believe in yourself.”

2016-03-25
Previous Post: Stuttgart’s Best Barracks of the second quarter recognized
Next Post: Careers are not impossible for determined military spouses