Effect of smartphones on vision and health of service members 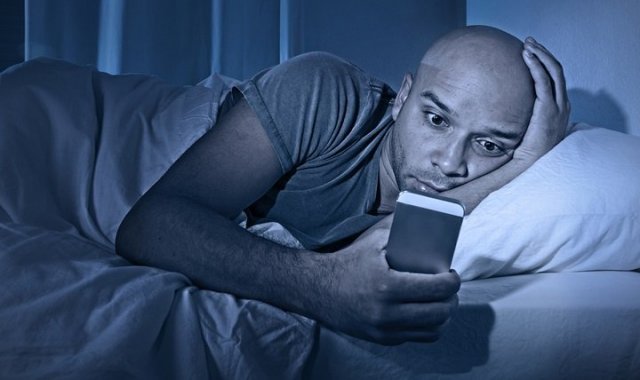 Sleeplessness is just one of several potential outcomes from the extended use of smartphones.

As much as we depend on our mobile devices for viewing and responding to emails, checking the weather, reading headline news and posting status updates on Facebook, our smartphones may be causing vision problems. Staring at those tiny screens can bring on an array of eye issues, such as blurred vision, headaches, sore eyes, headaches, muscle strain and dry eye.

“When you are using smartphones, both the screens and what we are trying to see are typically very small, and this taxes any individual’s ability to focus on and resolve the content being viewed,” said Felix Barker, O.D., an optometrist with the Department of Veterans Affairs who works with the DoD/VA Vision Center of Excellence. “For example, if you’re looking at the same print on a computer screen, not only is the screen larger but so is the print, making a computer monitor much easier to see than a smartphone.”

Barker also said smartphones require holding the device closer to the eyes, increasing the demands on vision. “The closer a person holds something to the face, the more the eyes try to converge, meaning that they turn closer together,” he said. “When you spend an excessive amount of time on smartphones, you can put a lot of stress on your vision and cause blurred or even double vision.”

Use of smartphones can also cause another eye-related problem: sleeplessness. Many contain blue light, which can disrupt the production of melatonin, a hormone that helps regulate the sleep cycle. Barker suggests limiting smartphone usage at bedtime. “Our brains begin to produce melatonin when we are ready to go to sleep, and blue light interferes with that process,” he said.

He highlighted other key factors for service members that can affect their success using mobile devices. “There are a significant number of warfighters who have been exposed to blast injuries who have vision problems,” he said. “They can often have trouble converging their eyes, and being able to focus their vision. Or they may think their cognitive ability to perform daily tasks has been inhibited by the blast injury, when in fact poor performance is due to poor vision.”

Age is another factor that can affect the ability to use mobile devices. “There’s a natural loss of visual focus that occurs in our midlives,” said Barker. “Around the age of 40 it becomes critical, and that’s about the time when people need reading glasses.”

Smartphone use can aggravate symptoms of post-traumatic stress disorder as well. “Someone with PTSD may be confused about what is really limiting their ability to perform routine visual tasks, like viewing information on their smartphones,” he said. “They may be thinking, ‘I can’t cope.’ This is another reason why it’s very important—especially for people who have been deployed—to get regular vision examinations.”