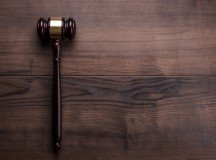 By the Stuttgart Law Center

Help! The Military Police said I was “titled.” I don’t know what this means.

A criminal investigative report? What is that?

A criminal investigative report is a document used by agencies like CID or other DOD law enforcement organizations to monitor investigations. These reports are indexed in the Defense Criminal Index of Investigations.

No, titling is an administrative procedure and does not mean you have been found guilty of any crime. A guilty finding would require that a court of law find you guilty of committing the crime “beyond a reasonable doubt,” a much higher standard than the “credible evidence” standard used in titling. “Credible information” is sufficient information to convince a trained criminal investigator to presume that the fact or facts in question are true. Judicial or adverse action will not be taken solely based upon titling.

Why does the DOD title people?

The purpose of titling is to ensure that information can be retrieved for law enforcement or security purposes in the future. Titling ensures that subjects, victims and pertinent facts are accurately recorded and lends efficiency to investigations.

What if I believe that I was incorrectly titled?

Even if later found not guilty by a court of law, there are only two ways to remove a name from the Defense Criminal Index of Investigations:

If you were titled and you believe that one of the two foregoing justifications exists to remove your name, contact your local Legal Assistance Office. However, keep in mind that because “credible information” is not a high standard, titling removal is extremely rare.

While a juvenile may be titled, in many instances their identity will be protected. However, simply because one’s identity is protected does not mean that local law enforcement, Congress, or other governmental agencies cannot request investigative records in order to pursue criminal charges or investigate a juvenile offender.

While the information is not publicly available, local, state, federal and foreign law enforcement agencies may request access if there is an investigative or law enforcement interest and disclosure is not otherwise prohibited.

For what purpose is titling information used?

Founded investigative reports may be used to adjudicate background checks for security clearances, to determine suitability for sensitive positions such as child care providers, and for the filing of unfavorable information in military personnel files.