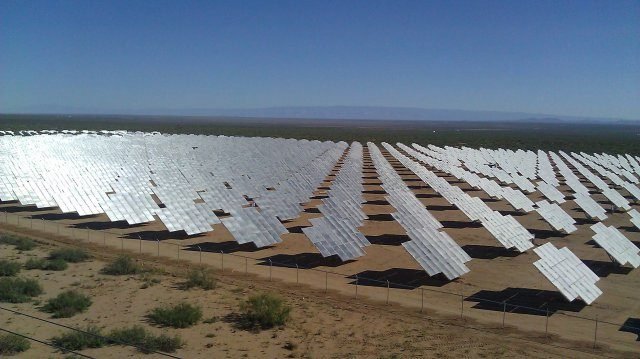 In less than five years, the Army has engaged in 127 energy-saving projects with the private sector that now exceed $1 billion in investments, announced Secretary of the Army Eric Fanning.

Fanning made the announcement Aug. 11 at the Department of Energy Training and Trade Show in Providence, Rhode Island. He explained that these projects were undertaken in response to a challenge from President Obama.

The president challenged all federal agencies in December 2011 to partner with companies to save energy. It was called the Energy Savings and Performance-Based Contracting Investments Initiative and the president wanted all of government to execute $4 billion in projects by the end of 2016.

The Army’s projects alone represent 33 percent of all the federal government’s current contributions to meeting the president’s goal, Fanning said.

“On our installations, and wherever we maintain and train our force, the Army is focused on finding the sweet spot between energy efficiency and energy security,” he said. The 127 projects have been undertaken at 52 installations.

The $1 billion milestone was surpassed with a contract signed, Aug. 11, by Anniston Army Depot and its utility company.

Under the Anniston contract, Alabama Power is providing $20.8 million to fund new high-efficiency chillers, a new compressed air plant and new heating systems at the installation, along with other initiatives that include high-efficiency lighting, a water conservation project, new ventilation fans and decentralization of the depot’s steam system.

“This is a case where public policy has worked well,” said Katherine Hammack, assistant secretary of the Army for Installations, Energy and Environment.

These contracts are important to the Army, she said. Federal agencies like the Army can leverage their utility budgets and take the steps essential to enhancing resiliency, achieving cost savings, and improving operations and maintenance, with no upfront costs to the government, she explained.

The costs of the projects are paid back over time as the Army realizes savings from the improvements, Hammack said.

There are actually two different types of energy-saving partnerships, said Randall Smidt, an engineer working for the Office of the Assistant Chief of Staff for Installation Management. He explained the difference:

Utility Energy Service Contracts, or UESCs, are agreements between utility companies and government entities. The Anniston project is a UESC contract and the Army has initiated 42 of these in the last five years.

Energy Savings Performance Contracts, or ESPCs, are partnerships between the government and an energy service company — such as Honeywell Building Solutions, Siemens Government Services or Schneider Electric. The Army has initiated 85 of these ESPC partnerships in the last five years.

While partnerships with energy service companies or ESCOs can include renewable-energy projects — such as solar, wind and geo-thermal — the greater portion of these projects still focus on making conventional energy usage more efficient.

About one-fourth of the agreements include some type of renewable energy projects, Smidt said, and some of those are notable.

“We’ve got one small waste-to-energy plant” under design at Fort Irwin, California, said Smidt, adding that it’s scheduled to come online next year.

Smidt is the Army’s ESPC program manager. He explained that ESPC contracts, known as task orders, require annual savings measurement and verification, and include a minimum guaranteed savings amount.

Funding for these projects must be paid back to the ESCO within 25 years, along with interest. The cost avoidance in energy savings is used to pay the company, and of course, the government gets to keep the rest of the energy savings.

Many of the projects net cost avoidance that well exceeds the original energy-saving goals, Smidt said.

For instance, more than $2 million in energy costs have already been saved at White Sands Missile Range, New Mexico, by a 42-acre solar-array project that came online in December 2012.

Two wind turbines at Fort Buchanan, Puerto Rico, are estimated to produce more than 5 percent of the installation’s power while 21,824 solar photovoltaic panels there will produce about 5.5 magawatts of power, which is at least 60 percent of the post’s current power demand at peak periods.

Not all ESPC contracts involve renewable-energy projects, though. Rock Island Arsenal, Illinois, has a $39-million infrastructure-modernization project at its Joint Manufacturing and Technology Center. Honeywell is installing high-efficiency HVAC systems and natural-gas heating that will allow the tech center to disconnect from the garrison’s coal-fired steam plant. New plating and paint systems at the tech center are also part of the upgrade.

Virtually all of the UESC contracts are aimed at making traditional HVAC and energy systems more efficient.

The UESC projects are funded by a utility company that “might be a longer-term partner than a private company just coming in new for the project,” Smidt said, when comparing a utility to an ESCO.

“Typically the utility knows the installation well,” because they’ve been working long-term on the installation, he said. The contracts are competed, but often utility companies that have already been providing services on post make the best offers, he explained.

Funding for UESC projects are normally paid back to the utility companies in fewer years than the ESPC projects. In both cases, the government gets to keep any additional savings provided by the improvements.

UESC projects do not guarantee savings, but they do guarantee performance, said Randy Shed, energy program manager in the Office of the Assistant Secretary of the Army for Installations, Energy and Environment.

“We’re trying to reduce the cost of brown power as best we can,” Shed said. “We have to stretch our dollars.” These projects “reduce the energy going out the window,” he explained.

“It only makes sense and shows we are very frugal and careful of how we spend the taxpayer’s money.”

The Army has actually been pursuing UESC contracts since 1992. In 25 years, the Army has initiated 382 projects at 48 installations, saving 4.4 trillion BTUs of energy annually.

ESPC contracts have been around the Army since 1996. A total of 242 contracts at 78 installations have involved $1.856 billion in private-sector investments. These projects save the Army about 8.3 trillion BTUs of energy per year.

Adding the two types of contracts together, that adds up to saving 12.7 BTUs of energy annually — enough to power 341,132 average U.S. households.

Additionally, the Army is also initiating larger contracts for renewable-energy projects. The larger solar-array projects now come under either Power Purchase Agreements or Enhanced Use Leases.

The Army was already in the process of expanding energy-saving initiatives when the president made his challenge five years ago, officials said. As a result, they said, the Army was positioned to be responsive to the president’s goals.

The Army is currently leading all government agencies in the number of energy-saving contracts that it’s been able to arrange in response to the challenge. But that’s not too surprising, officials said, since the Army is also the government’s largest utility consumer.

“It’s been a pretty drastic ramp-up” of investments over the past four years, Smidt said.

The $1 billion is a lot of investment, said Shed. “It’s a lot of hard work from all the installations and it’s been a total team effort. But still we have a lot more to do,” he added.

Fanning said over the next couple of years, the Army will focus on Combined Heat and Power, or what many people know as cogen or co-generation.

“I’m committing to a doubling of the amount of CHP produced by the Army in the next two years, and to triple it in four years,” Fanning said. “That means we will add 50 megawatts per year through CHP projects, which is more than what the Army has added in the past 10 years combined.”