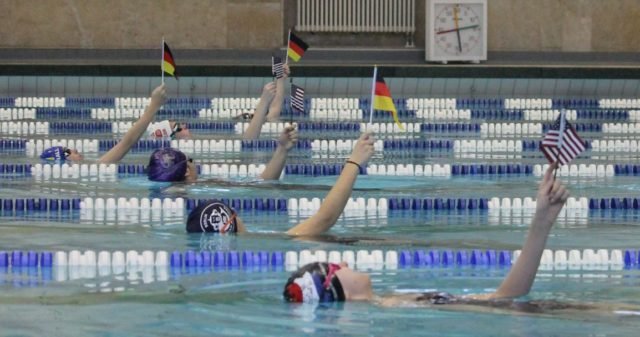 By Daisy Geiser
Special to the Stuttgart Citizen

“Fifty-three Piranhas represented Stuttgart in the water contending for the trophy and giving it their all,” Sanders said.

Roughly 200 swimmers, from age six to 19, from Berlin, Kaiserslautern, Stuttgart, Vilseck and Wiesbaden teams competed at the historical Finkensteinalle swimming pool.  Each of the 5 teams had about same number of swimmers.

During the meet, running totals were not announced, so teams had to wait until the end to find out who was in the lead. Coaches, swimmers, and parents eagerly anticipated the final announcement, which came after the last relay race finished.

Tension mounted. Announcers called out fifth, fourth and third places. Then, it came down to rivals Stuttgart and Kaiserslautern

When organizers announced that the Piranhas took first place, the Stuttgart swimmers found they scored 1054 points, 90 more that the Kaiserslautern Kingfish’s 964 points.  The Wiesbaden Wahoos had 448, the Berlin Bear-a-cudas, 381, and Vilseck Sea Vipers, 355.

The Piranhas swimmers left Berlin and focused training for their individual events at the EFSL short distance championships in the Netherlands at the end of February.

Relay Team:  Madeline McBride, Daniel Madjid, Truitt Taylor, and Isabel Geiser.  This 11-12 age group relay earned a total of 24 points for the team in the medley and freestyle relays. 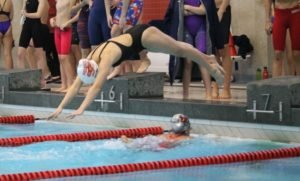 Dropping more than five seconds from their seeded time in an individual event: