The Stuttgart basketball teams showed no signs of holiday rust as they took care of the visiting Hohenfels’ Panthers with relative ease, Jan. 7, as the girl’s team won 46-7 and the boy’s team won 87-48.

The girl’s team came out shooting and took a commanding 29-4 lead into the half time. After the break, the Lady Panther’s continued their aerial assault on the offensive board; running up the score to 46-7 midway through the third quarter.

However, it was probably the Lady Panther’s suffocating defense that caused the Tigers to turn the ball over possession after possession and ultimately forced the Tiger’s coach to call a halt to the game before the third quarter had ended.

“This Stuttgart girls’ team is a well-rounded team. They know how to put the pressure on when they are playing defense, which can frustrate the opposing team,” said Robin Hess, Lady Panther’s head coach. “But their offensive play has really improved. They play very unselfish team ball and always look to see who is open before shooting the ball themselves.”

Although the girls team played a dominate game from start to finish, the boys’ team started out a little cold before getting hot in the second half and winning by nearly 40 points.

“There is no doubt; the guys started a bit slow, but that was to be expected after three of our starters transferred out over the holidays,” said head coach Mitch Hiser. “We were going to need other players to step in a big way.”

After getting a coach’s pep talk midway through the second half and only leading the Tigers by single-digit numbers, the team responded with vengeance and went into the half time break with a 40-22 lead.

In the second half, the Panthers’ took control of the game and with a half dozen slam dunks by Armad Johnson, which brought the standing-room-only audience to its feet, the team went on an offensive push that saw a number of the players’ score in double figures.

“The second half was a real improvement in how their played together as a team. With a little work in a couple of areas, this team will be fine,” said Hiser.

The Panther basketball teams are starting to peak at the right time as they will now face one of the Division 1 powerhouses as Ramstein comes to town this weekend with games at the Stuttgart High School on Jan 13 and 14. 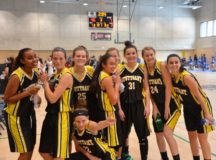 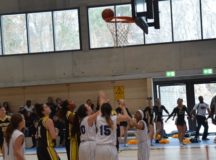 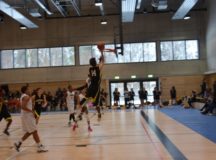 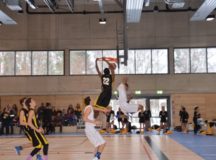 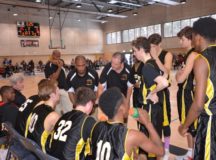