Volunteers pitch in to pitch mail 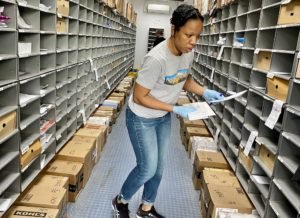 Inside, postal workers and community volunteers offload tons of packages and sacks of letters – as much as Christmas season, although it’s now spring. The crew is no longer surprised to see mail-ordered toilet paper, diapers, car parts and video games, said Ray Hayes, postal supervisor at Patch’s community mailroom.

“It’s definitely unusual,” Hayes said. “Normally, after January, we start to drop off in volume. Right now, the volume is starting to peak.”

Postal staff across U.S. Army Garrison Stuttgart work tirelessly, despite the threat of COVID-19 in the community. In late February, when the virus first appeared in Germany, most were planning well-deserved vacations after the holidays — a season of enormous mail loads that runs from November to January.

“There are a lot of people who are tired. This is supposed to be our time for personnel to rejuvenate and take the leave they’ve been waiting to do,” Hayes said. “Because of the shortage of personnel, they don’t get the opportunity to get that break.”

The Patch CMR has 3,240 mailboxes and services more than 8,000 people — one third of the garrison. Up to five shipments arrive each week, depending on aircraft availability.

Volunteers were a welcome sight.

Air Force Master Sgt. Yvonne Stubbs, who’s normally based at Langley Air Force Base, wanted to help out. She’s since found the work hard, but also fun, she said.

“It’s a little chaotic in there,” Stubbs said. “But the crew is very nice. This gives me something to pass the time and help them out.”

Alongside Stubbs, Sgt. 1st Class Joshua Domalski, an Army Reserve Soldier from Rochester, NY, took time from his job at U.S. Africa Command to do his part, he said.

“I just thought I’d help out,” Domalski said, adding that when not at work, he cycles nearby forest trails. “I just bike everywhere, as much as I can, and listen to music, just pedaling and enjoying the moment.”

“At Kelley Barracks, we originally had eight military members supporting the mail room. They couldn’t have maintained operations without them,” Palm said. “The community really came together to help out.”

When the garrison commander, Col. Jason Condrey, implemented the “Red, White & Blue” shopping groups to distance community members, mailrooms were included in the schedule. That meant people could only pick up packages when their group was supposed to be in the community — just a few days, every two weeks.

Meanwhile, community members turned to online shopping, ordering items through the mail. Within days, Patch’s mail room was full, making it difficult for staff to process, sort and shelve items for pickup, Hayes said. Community members also play a part in the system.