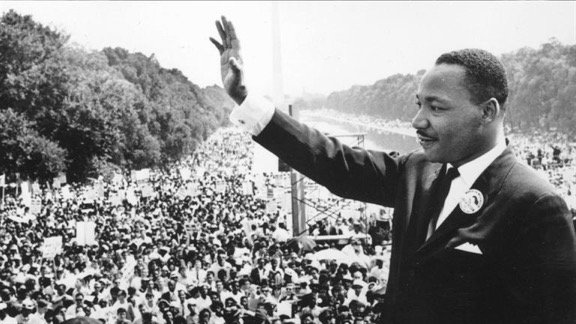 Photo from the National Archives and Records Administration
Dr. Martin Luther King Jr. addresses a crowd of more than 250,000 on the Capitol Mall during his “I have a dream” speech, Aug. 28, 1963.

The life of Dr. Martin Luther King Jr. was commemorated, Jan. 11, at the Kelley Theater Center on Kelley Barracks.  The event was hosted by the U.S. Army Garrison Stuttgart Equal Opportunity Office and U.S. Africa Command. The theme of the observance was “Remember! Celebrate! Act! A Day On, Not A Day Off!!” 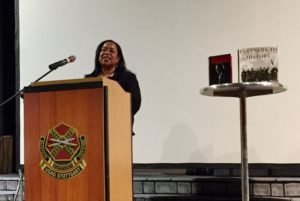 Juandalynn R. Abernathy speaks to the Stuttgart community, Jan. 11, 2017 on the history, and way forward, of the Civil Rights Movement to honor Martin Luther King Jr. during the annual Equal Opportunity event on Kelley Barracks. Photo by Holly DeCarlo-White

The guest speaker was Juandalynn R. Abernathy, whose father Rev. (Dr.) Ralph D. Abernathy was a co-founder of the Civil Rights Movement. He was a close friend to King, and after King was assassinated, Abernathy was King’s successor.

Abernathy reminded attendees how important is is to never forget our history, or it is destined to repeat itself.

“We must unite as true believers in democracy…we’ve got to get our message out there,” she said, “…we are all the same.” 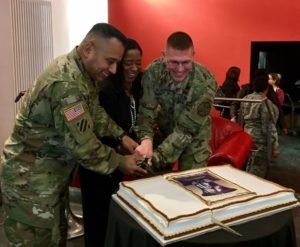 “On this holiday, we commemorate the universal, unconditional love, forgiveness and nonviolence that empowered his revolutionary spirit,” Quintanilla said.

King taught us timeless values through his example, Quintanilla said, noting those values were “courage, truth, justice, compassion, dignity, humility and service that so radiantly defined Dr. King’s character and empowered his leadership.”

For more information or to participate in future observances, call the garrison EO at DSN 430-7945.

To view more photos from the event, click here.