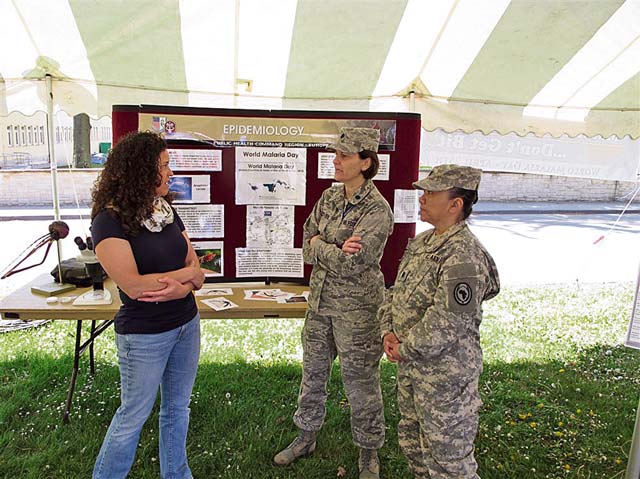 Crowds gathered around a tent of displays and spoke with experts about the dangers of malaria and how to stay safe from mosquito bites.

The World Health Organization says malaria is endemic in 46 countries in the Sub-Saharan African Region with more than 90 percent of the estimated 300–500 million clinical cases of malaria occurring in Africa.

Navy Capt. David Weiss, the AFRICOM command surgeon, said the event helped highlight the malaria threat in much of the developing world.

“Health is a key component to the security of any nation,” he said. “Disease is a major driver of stability for sub-Saharan Africa, and effective malaria programs support peacekeeping operations.”

According to the African Union, malaria infection rates among African military personnel hamper the ability of these militaries to participate in peacekeeping operations.

“It is important to use bug spray and mosquito nets, but also to use the malaria medication correctly. One of the biggest problems is people not taking their malaria medication seriously. There are lots of stories about side effects like crazy dreams or going crazy which are not proven medically. It is best to get medical advice from a medical professional and remember to take your meds,” she said.

Michelle Sanders contracted malaria in Togo in 1995 while working for the Peace Corps. She said that she stopped taking her malaria medication because she thought she was safe during the dry season.

“One minute I was fine and then I became delirious,” she said. “When I finally came out of my fever, my nurse said I was lucky to be alive.”

World Malaria Day was instituted by the World Health Organization member states during the World Health Assembly of 2007. The annual celebration aims to highlight the need for continued investment and sustained political commitment for malaria prevention and control. The theme of this year’s World Malaria Day was “Invest in the future. Defeat malaria.”