Welcome to Stuttgart: Getting your vehicle registered and fueled in USAREUR 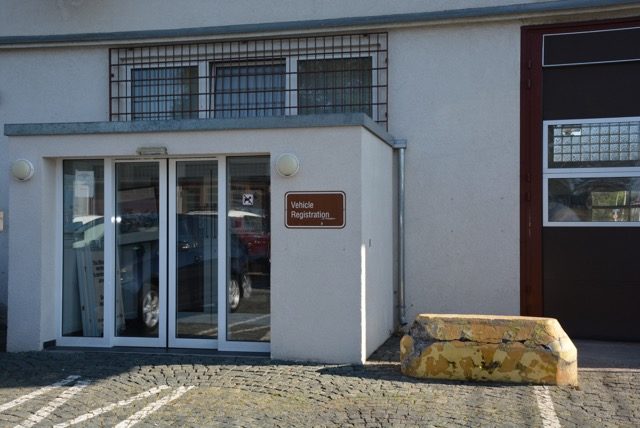 The garrison VRO is located in Bldg. 2930 on Panzer Kaserne. Photo by USAG Stuttgart Public Affairs

Once personnel have their US Army Europe driver’s license in hand, they can register an operational vehicle in the USAREUR Vehicle Registry. Whether bringing a vehicle from the U.S. or registering a new or used vehicle purchased here, the process is essentially the same. The first step is usually obtaining temporary license plates and registration. This requires a $35 fee for each year registered (some newer vehicles may be eligible for multi-year registrations).

Customers must bring their U.S. forces identification card, USAREUR driver’s license and proof of insurance, as well as proof of ownership or title when registering a vehicle. Contractors must also bring their Common Access Card (CAC), SOFA card, and passport. The insurance must be valid in Germany; policies good in the States aren’t accepted here.

The temporary plates issued are good for 30 days and are intended to give vehicle owners some time to prepare the vehicle to meet the requirements of the USAREUR safety inspection, which is the next step in the process.

Car owners take their cars to the inspection station where the vehicle will be put through an extensive safety inspection that checks the general mechanical condition of the vehicle, brakes, muffler and exhaust system, safety features and many other components. All vehicles must be re-inspected whenever registration is renewed, which is usually annually. Brand new vehicles may be exempted from the initial inspection; contact the vehicle inspection office for more information.

If the vehicle passes the inspection, the temporary plates can then be exchanged for regular plates. There is no additional fee when exchanging the temporary plates for regular plates unless the customer opts for a two-year registration, in which case an extra $35 will be assessed. If the car fails inspection, the defects will be shown and explained to the owner, who can then have the car repaired on or off base. The vehicle can be taken through inspection several times before passing, and there is not a set restriction on number of inspections, but there is no extension beyond the initial 30-day period.

Step-by-step checklists with required documents and processes are available on the garrison website.

Tax-free fuel prices with your fuel ration card are comparable to those found in the U.S. – German fuel prices can be up to twice as high.

The fuel ration card is another benefit derived from the SOFA.

This card permits personnel to purchase fuel on post and at select stations off post at prices comparable to stateside prices instead of the standard European price, which is typically much higher. Most cards are good for up to 400 liters of fuel monthly, though some vehicles will be allowed a larger ration. The card can be obtained at the Express gas stations on Patch and Kelley Barracks, as well as the main Exchange on Panzer Kaserne. The card can be preloaded with money at almost any Exchange store and acts essentially as a prepaid cash card at select off post Esso stations. Most German Esso stations participate in the program, but it is usually a good idea to check with the attendant before fueling up.

On post, the card can be used as a prepaid card, or drivers can opt to pay with cash or credit card and keep the card’s balance for off post use. In any case, the card is needed any time the vehicle is fueled in order to avoid paying European prices for fuel.

Drivers should maintain awareness of the remaining balance of their fuel rations. Each time fuel is purchased, a receipt is provided showing the remaining cash and fuel ration balance. Multiple vehicles of the same owner (and multiple vehicles registered to the same sponsor, regardless of the primary user) share from a single monetary balance on the card and each vehicle draws from its own ration balance. The gas card and the associated ration are intended for those personnel listed on the registration only, and cannot be shared with others, even other U.S. personnel who are entitled SOFA benefits.

So, now with license in hand, a registered vehicle and a fuel ration card, newcomers are ready to drive.